Harry  Potter and the Chamber of Secrets by JK Rowling

All Harry Potter wants is to get away from the Dursleys and go back to Hogwarts School for Witchcraft and Wizardry. But just as he’s packing his bags, Harry receives a warning from a strange, impish creature named Dobby – who says that if Harry Potter returns to Hogwarts, disaster will strike. 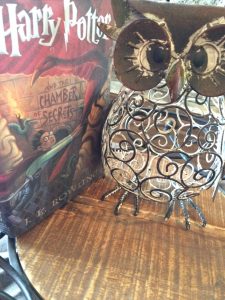 And strike it does. For in Harry’s second year at Hogwarts, fresh torments and horrors arise, including an outrageously stuck-up new professor, Gilderoy Lockheart, a spirit named Moaning Myrtle who haunts the girls’ bathroom, and the unwanted attentions of Ron Weasley’s younger sister, Ginny.

But each of these seem minor annoyances when the real trouble begins, and someone–or something–starts turning Hogwarts students to stone. Could it be Draco Malfoy, a more poisonous rival than ever? Could it possibly be Hagrid, whose mysterious past is finally told? Or could it be the one everyone at Hogwarts most suspects… Harry Potter himself.  -Goodreads

Harry Potter and the Chamber of Secrets is not one of my favorites of the series, but it is not my least favorite. I struggle with the first two books, I think, because the characters are so young and I want the real action to start. I know there is action and adventure, but once you read the entire series, the first ones seem so minor in comparison. However, there are some of my favorite characters in this book and I believe it is an important book in the series because it gives you background on Lord Voldemort, Hagrid, Hermione, Draco, and the wizarding world as a whole. I will start by listing some of my favorite parts of the book and quotes. I do give this book FIVE STARS though because of JK Rowling’s amazing writing style, character development, descriptions, and overall storytelling.

Obviously, this book is for those who loved Harry Potter and the Sorcerer’s Stone. I also believe those who love friendship, words of wisdom, humorous writing, magic, and mythical creatures will enjoy this book as well.

Have you read HP and the Chamber of Secrets? Who was your favorite character? What did you love? Do you struggle with any of these books in this series?

Thoughts: Maybe He Just Likes You by Barbara Dee
I am sitting on my back deck with my cup…