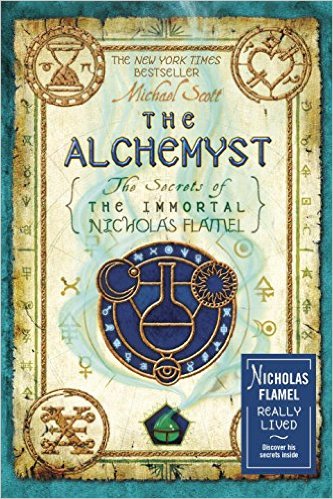 The Secrets of the Immortal Nicholas Flamel Series by Michael Scott

This is another one of my favorite fantasy series, and it was born out of my love for Harry Potter. In the first book, Harry Potter and the Sorcerer’s Stone, there was a character briefly mentioned-Nicholas Flamel. I never thought much about this character until two years ago when I had a student reading this series who excitedly told me that I HAD to read this series! Well, two years later, I have read the series and here I am!

This will be a different review post because I have read this series over the time period of a year. I just finished the final book, however I do not believe I could write a good review on each book unless I reread because I did not make notes on my favorite quotes and parts of the book. If you would like separate reviews, let me know and I would be happy to write it up for you!

Here is what I am going to do, I will give a summary of the first book in the series, my rating of the series as whole, and a list of the series in order, with links to Goodreads for more information.

Nicholas Flamel was born in Paris on 28 September 1330. Nearly seven hundred years later, he is acknowledged as the greatest Alchemyst of his day. It is said that he discovered the secret of eternal life. The records show that he died in 1418. But his tomb is empty and Nicholas Flamel lives. The secret of eternal life is hidden within the book he protects – the Book of Abraham the Mage. It’s the most powerful book that has ever existed. In the wrong hands, it will destroy the world. And that’s exactly what Dr. John Dee plans to do when he steals it. Humankind won’t know what’s happening until it’s too late. And if the prophecy is right, Sophie and Josh Newman are the only ones with the power to save the world as we know it. Sometimes legends are true. And Sophie and Josh Newman are about to find themselves in the middle of the greatest legend of all time.

(From the 6th book) The two that are one must become the one that is all. One to save the world, one to destroy it. -Goodreads

Now, this is a very brief summary. I will elaborate a little more, just to get you hooked. The main characters are Sophie and Josh Newman. Throughout this series you watch these two characters grow, both in the powers and as people.

What I think could be done better:

Overall, I give this series FOUR STARS. I loved the historical connections, the mythology, the descriptions, the action, and the adventure. What brought it down to four stars was the lack of character development. I did not really care about the main characters-I definitely rooted for the minor characters more.

I recommend this series for those that love history, mythology, creatures, action, and adventure. You will not be disappointed!

Here are the books in order:

There are also 2 additional books that I have not read:

Billy the Kid and the Vampyres of Vegas-Book 5.5

Let me know what you think!

Student Reviews: Just Under the Clouds by Melissa Sarno
Buy your copy from your local indie or from Bookshop.org!

Review: Muhammad Ali by Kwame Alexander and James Patterson
Thank you to Edelweiss for an eARC and for Libby.fm…