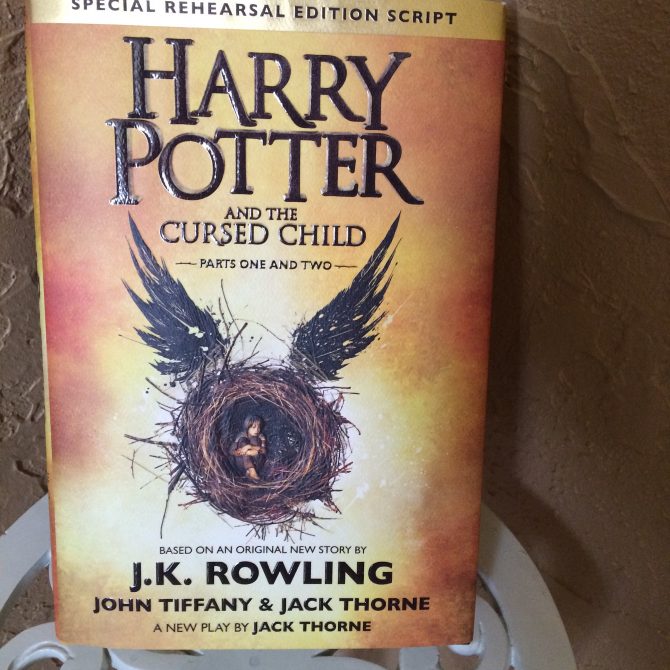 Based on an original new story by J.K. Rowling, Jack Thorne and John Tiffany, a new play by Jack Thorne, Harry Potter and the Cursed Child is the eighth story in the Harry Potter series and the first official Harry Potter story to be presented on stage. The play will receive its world premiere in London’s West End on July 30, 2016.

It was always difficult being Harry Potter and it isn’t much easier now that he is an overworked employee of the Ministry of Magic, a husband and father of three school-age children.

While Harry grapples with a past that refuses to stay where it belongs, his youngest son Albus must struggle with the weight of a family legacy he never wanted. As past and present fuse ominously, both father and son learn the uncomfortable truth: sometimes, darkness comes from unexpected places. –Goodreads

I am going to keep my review and thoughts short and sweet because this is a new book and I do not want to spoil it for anyone. This is a MUST READ for Harry Potter fans. It has been a bit controversial among the Harry Potter community because this was not written by JK Rowling herself, it was based on her stories and she approved it. It has also been unpopular because it is written as a play script and not a novel. However, I believe that it was a wonderful continuation of the Harry Potter series and that it was very entertaining. It was funny, it had wonderful new characters, and had an interesting plot. I gave it FOUR STARS.

Although it was a really entertaining story, it had its flaws. I did not like the portrayal of some of the old characters and the character development was minimal. The characters are most likely more developed if you watch the play, which I hope to as soon as it comes close to my area!

All in all, I believe you should read this book. It reads easy for a play and adds to the Harry Potter world.

Mini Review
What grabbed me about this book was the cover. Right…
There is 1 comment for this article