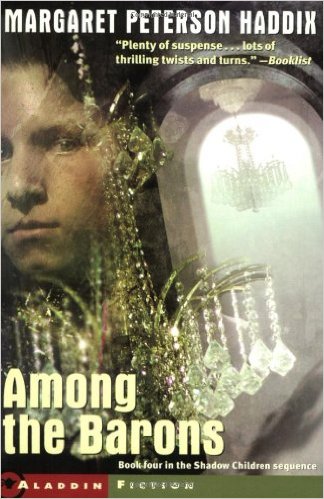 Among the Barons (Shadow Children Book #4) by Margaret Peterson Haddix

Luke Garner, an illegal third child, spent his first twelve years in hiding. For the past four months Luke has lived among others, using the identity of Lee Grant, at the Hendricks School for Boys. But just as things are finally starting to go right, Lee’s little brother Smits arrives at the school and Luke finds himself caught in a tangle of lies that gets more complex with every passing day.

Can Luke trust Smits to keep his secret? And can he trust Smits’s menacing, fat bodyguard, Oscar who carrys a sledge hammer? –Goodreads

FIVE STARS: I chose this book because my teacher got me hooked when she read us the first one. I like how the book goes along with the series and I like how its turning out. I’m very interested in the series because I’m also a third child.

I would recommend this book to anyone!

Day 20 Picture Book Frenzy: Mendel’s Hanukkah Mess Up by Chana and Larry Stiefel and Daphna Awadish
Mendel is always messing up. So, no one is more…