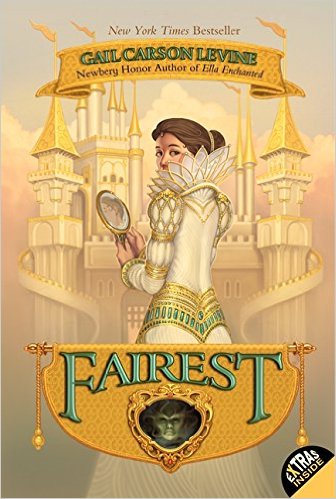 In the kingdom of Ayortha, who is the fairest of them all? Certainly not Aza. She is thoroughly convinced that she is ugly. What she may lack in looks, though, she makes up for with a kind heart, and with something no one else has-a magical voice. Her vocal talents captivate all who hear them, and in Ontio Castle they attract the attention of a handsome prince – and a dangerous new queen. In this masterful novel filled with humour, adventure, romance, and song, Newbery Honor author Gail Carson Levine invites you to join Aza as she discovers how exquisite she truly is. –Goodreads

FOUR STARS: So far in my book it says that she was born singing and that she was abandoned and left at the Featherbed Inn in the Ayorthaian village of Amonta. It says the wench who brought her to the inn payed for their next chamber in advance and also smuggled her in unseen. The next day the wench left, leaving her behind. I didn’t like that part in the book because they shouldn’t have left her behind especially since she was only around a month old. I mean she has been left behind two times in about four months it’s sad that a baby would have to go through that.