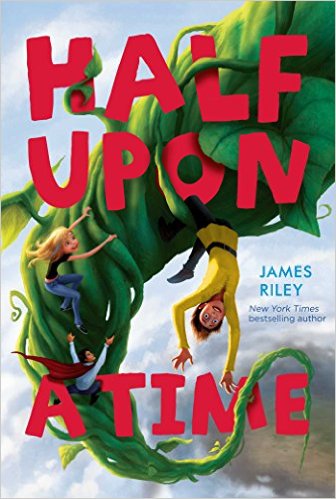 Half Upon a Time by James Riley

Life’s no fairy tale for Jack. After all, his father’s been missing ever since that incident with the beanstalk and the giant, and his grandfather keeps pushing him to get out and find a princess to rescue. Who’d want to rescue a snobby, entitled princess anyway? Especially one that falls out of the sky wearing a shirt that says “Punk Princess,” and still denies she’s royalty. In fact, May doesn’t even believe in magic. Yeah, what’s that about? May does need help though–a huntsman is chasing her, her grandmother has been kidnapped, and Jack thinks it’s all because of the Wicked Queen . . . mostly because May’s grandmother might just be the long-lost Snow White. Jack and May’s thrillingly hilarious adventure combines all the classic stories—fractured as a broken magic mirror—into the first of an epic new series of novels for the ages. –Goodreads

FIVE STARS! I like that it had a lot of fantasy and action, and I LOVE fantasy. I chose this book because the cover had a beanstalk which meant FANTASY.

I would do anything for my queen little prince.

Teachers to read it to their students.

3 THINGS I LOVED ABOUT WE’RE NOT FROM HERE BY GEOFF RODKEY
I recently received Rodkey’s new book, We’re Not From Here…
There are 2 comments for this article