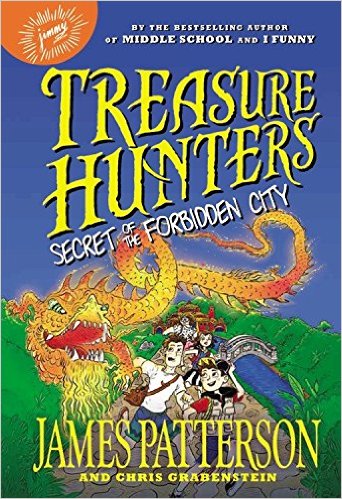 The Kidds – treasure hunting family extraordinare – are heading to China, on a journey that will lead them beyond the Great Wall and into the underbelly of Berlin.

Bick and Beck Kidd are desperately trying to secure the ancient Chinese artefact that will buy their mother’s freedom from renegade pirates. But when the kidnappers force them to locate an even greater treasure – priceless paintings stolen by Nazis, the Kidds must rely on their own cunning and experience to outwit the criminals, all while their mom’s life is on the line. –Goodreads

FIVE STARS:  I chose this book because I was curious of what will happen next in the Treasure Hunters series. I liked how there was so much that was going on and that there was always another mystery that followed up after the next one. I didn’t like very little, but one thing that I was not a fan of was the horrible flirting that Tommy did. In my opinion, this was the best book of the Treasure Hunters series and would like to see a fourth one!

I would recommend this book to anyone who likes a good adventure or mystery book because this one is both!

Happy reading! Share your thoughts on this book below!

Recent Reads November 9, 2020
Another month and more reads! Here are the books I…