Harry Potter is lucky to reach the age of thirteen, since he has already survived the murderous attacks of the feared Dark Lord on more than one occasion. But his hopes for a quiet term concentrating on Quidditch are dashed when a maniacal mass-murderer escapes from Azkaban, pursued by the soul-sucking Dementors who guard the prison. It’s assumed that Hogwarts is the safest place for Harry to be. But is it a coincidence that he can feel eyes watching him in the dark, and should he be taking Professor Trelawney’s ghoulish predictions seriously? – Goodreads

Harry Potter and the Prisoner of Azkaban is my absolute favorite of the series. I have realized, after following hundreds of “bookstagrammers” on Instagram, that I am in the majority. Most Harry Potter fans agree that this is the best of the series. Here’s why I think it is a fan favorite: Harry’s parents and friends, the Marauders, animagi, and the solidifying of the friendship between Harry, Hermione, and Ron. Lord Voldemort is absent in this book, but he actually becomes more terrifying. You learn more of his power and his followers. Additionally, I am a fan of magical and mythical creatures and this introduces some of my favorites-hippogriffs, werewolves, and flobberworms. I’m kidding about the last one being one of my favorites! Overall, this book is definitely a FIVE STAR book and one of my all time faves. It’s also worth noting that this is the point where the movies start leaving major pieces out, which is always disappointing.

My Favorite Quotes and Moments

One Thing I Would Change

I would change the character of Neville Longbottom. He is portrayed in such a negative light and is always made fun of. He does grow throughout the series, but I never noticed how ridiculed he was until now. He is one of my favorite characters though and maybe it’s because he was the butt of every joke and his later redemption that makes me like him.

I would recommend this book, and the series, to all those who love adventure, friendship, and magic.

Just for fun, here’s a picture of my best reading buddy: 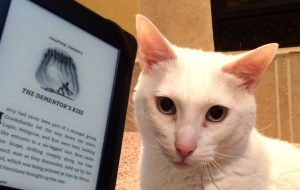