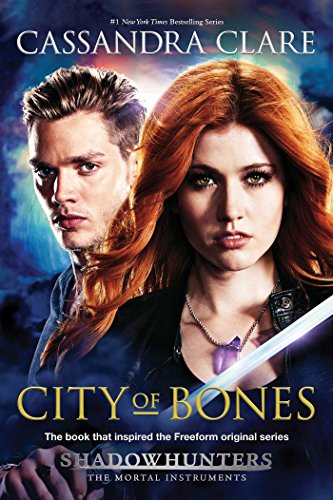 When fifteen-year-old Clary Fray heads out to the Pandemonium Club in New York City, she hardly expects to witness a murder― much less a murder committed by three teenagers covered with strange tattoos and brandishing bizarre weapons. Then the body disappears into thin air. It’s hard to call the police when the murderers are invisible to everyone else and when there is nothing―not even a smear of blood―to show that a boy has died. Or was he a boy?

This is Clary’s first meeting with the Shadowhunters, warriors dedicated to ridding the earth of demons. It’s also her first encounter with Jace, a Shadowhunter who looks a little like an angel and acts a lot like a jerk. Within twenty-four hours Clary is pulled into Jace’s world with a vengeance, when her mother disappears and Clary herself is attacked by a demon. But why would demons be interested in ordinary mundanes like Clary and her mother? And how did Clary suddenly get the Sight? The Shadowhunters would like to know…

Exotic and gritty, exhilarating and utterly gripping, Cassandra Clare’s ferociously entertaining fantasy takes readers on a wild ride that they will never want to end. – Goodreads

I chose this book because I watched the show. I knew there was a book and some people say that the book is way better so I decided to check it out. I also chose it because I am into fantasy. I love reading books about vampires,fairies and werewolf. So I decided to give this a try.

Five Stars.  I like how even in the face of danger the characters still joke and play around with a straight face.  I like how at the end of the book if totally leaves you hanging. But I guess that is why I should read the second one. Overall this book is amazing and definitely a top five.

My favorite quote in this book is ” Shadowhunters looking better in black than the widows of our enemies since 1,234.” I love this quote because that is the motto of the shadowhunters. It is what they live off of. Black is the official color, for some reason shadowhunters have an attachment to that color.

I recommend this book to anyone with a crave for fantasy. This book is filled with creatures form any where from demons to half angle. This book if perfect if you like fantasy.

Disclaimer: This book is for mature readers. Common Sense Media rates this book for ages 13 and up.