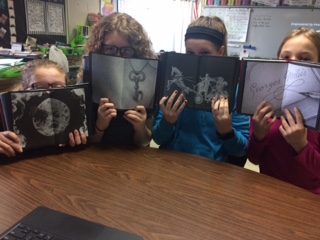 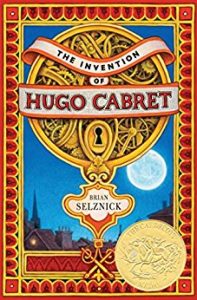 One of my book club groups, The Evil Ones, finished their first group book! It was the Invention of Hugo Cabret by Brian Selznick. Here is our final discussion that we had. These students had such wonderful thoughts and they were so excited to share the story! They are also creating an iMovie and an Instagram post that I will share later.

**Could be spoilers. You’ve been warned.

EB: Five stars. I liked how they kind of twisted it so it made it look like the automaton guy was abandoned. But really he wasn’t, he was found in an attic of a museum-Hugo’s father found it. The museum burned down while his father was inside. Hugo found the robot and took it to the train station (where he lives) and found his uncle.

HM: I really liked the book and gave it 5/5 because it isn’t like most books. His parents die, but he lives in a train station, and an old man creates movies, and I like how it’s just different.

CB: I gave it 5/5 because I like how it does a six months later at the end and how the old man and old lady took him in because he was living homeless in a train station. He helped the old man (George) to get job back-drew pictures, magician, and made movies. 3 brothers: Etienne, Rene, Monsieur Tabard brought the projector and had George watch the video. They had worked with them and made George remember the good times.

AH: I gave it five star and one of the most interesting parts in the book is where the lady was talking to Hugo about finding his uncle (didn’t know it was his uncle). Station inspector came and was going to take him to jail, George saved him.

Stealing- Is this a Tough Question?

CB: He had no other choice other than dying of hunger.

HM: He said in the book he would rather not steal.

EB: Uncle taught him how to steal things.

EB: But he didn’t know to cash them in.

CB: His uncle was the clock guy and so he got a check every time he worked

EB: Hugo had to sneak in and get the checks

CB: Because his uncle was drunk all the time

Other Notice and Note signposts?

CB: Contrast and contradiction with Isabel because at first she was a goody two shoes, middle she wanted him to do stuff for her, and at the end she was good again.

CB: Contrast and contradiction George was mean and then at the end he took Hugo in.

HM: Aha Moment finding out Georget made the movies

CB: Aha Moment automaton was not his dad’s, it was George’s – dad had it in museum and had it in a journal. That’s how the story starts because George took the journal from Hugo and threatened to burn it. But never did.

AH: Aha Moment When Hugo snuck out of their house, he found out George kept the blue mouse that Hugo fixed. He was surprised George hadn’t stolen it.

HM: Always keep going because it’s going to get better.

CB: Never judge someone because you don’t know what was in their past. (stealing)

EB and AH agreed with both themes.