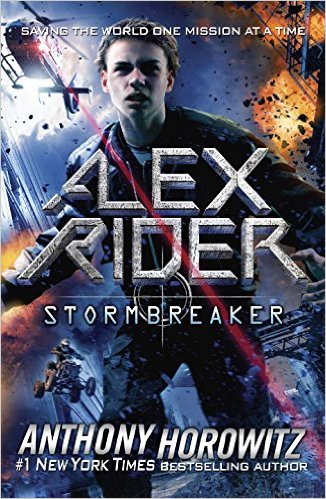 One of my book club groups, Three Meme-ateers, finished the first book in the Alex Rider series, Stormbreaker by Anthony Horowitz. Overall, they loved the book and hope to finish the series together. Here is our great discussion!

**There may be spoilers and reference to violence. Proceed with caution.**

CH: I liked it for a new series

GB: I liked it

CH: All of the action, the mysteries, those types of books are really interesting.

GB: The part that grossed me out was when the man of war got stuck on the person.

CH: Alex was trapped into the jellyfish tank and was going to use a cream that melts metal and used it to break out of the walls and the water exploded and the jellyfish came out and it somehow it got attached Nadia Vole and she died.

EC: Yassen. I have actually read the book of his past and that actually explains a lot in the first book and he goes through a lot and he’s super cool and he’s an assassin.

EC: Assassin’s are not necessarily a bad guy, they just work for themselves.

CH: Mr. Grin-just how weird and mysterious he was-his mouth was cut, always smiling, got his tongue cut out, muffling, knocked out Alex and knowing Alex was up to no good.

GB: Butler guy who gave him his gear.

EC: I liked him too because he made really cool gadgets. Technically, Alex isn’t supposed to have guns.

CH: Face your fears head on.

EC: Don’t be afraid to finish the job-even if it’s hard.

EC: Either let Jack go back to America and stay at the orphanage or go to the Agency and let Jack stay.

CH: He killed a guy with a harpoon gun, it seemed cold because he didn’t have any reaction to it. No emotion of why did I kill that guy, he just simply did it to escape.

EC: What to do with the gun he had and he decided to just shoot it.

GB: I liked it when he almost got cut in half. Wire cutters.

EC: He almost got ran over and burned.

(How are you with the violence?)

CH: I wish Yassen didn’t kill Mr. Sail because Yassen was assigned to and I was hoping to see him the other books. Wasn’t ready for him to go. Surprising.

Have you read the Alex Rider series? What are your thoughts? Leave your comments below!

STUDENT REVIEW: TREASURE HUNTERS-SECRET OF THE FORBIDDEN CITY BY JAMES PATTERSON
Treasure Hunters and the Secret of the Forbidden City (Treasure…