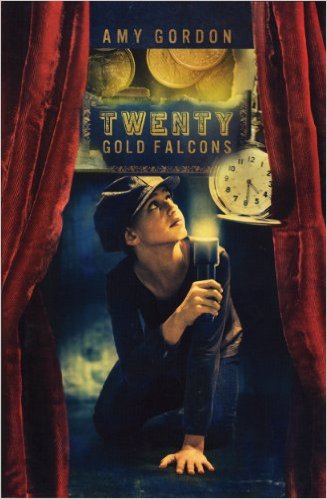 One of my book clubs, Squad, finished Twenty Gold Falcons by Amy Gordon. Here is their great discussion.

AS: Better than expected. I thought it would be just this ordinary adventure story, but it had a lot of twists, it wasn’t just about the treasure, it was about more than that. It was about her heritage.

KN: I thought it was really good, I didn’t expect it to be this interesting. About ⅓ of the way through it was interesting.

CC: I thought it was interesting, like AS said, it was better than expected.

KI: I had already read it, but it was good to read for the smaller details and so I could remember the story better.

AS: Home is where the heart is.

KN: She gave it away to five or six people to people who needed money.

AS: A bunch of different stuff.

AS: A lot of aha moments when they figured out clues.

CC: Words of the wiser.

AS and CC: A lot of again and agains with the mention of birds. The coins had falcons, the bird lady, falcons at the top of the building.

What about tough questions?

KI: What do with the falcons?

KN: Decide if she wants to go back home and live on the farm again or stay.

Who to recommend this book to:

AS: Maybe 4th-5th graders too.

KI: Yeah, I read it in fifth grade.

Have you read Twenty Gold Falcons? Leave a comment below!

3rd Quarter Book Photo Challenge
During the month of November, we participated in a bookstagram…