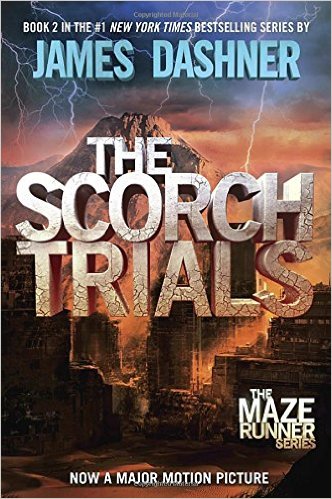 The L.A.D.D. book club group finished The Scorch Trials by James Dashner which is the 2nd book in the Maze Runner series. Here is our discussion. We talked a lot-mostly trying to explain things to me since I haven’t read it. I didn’t write everything, but we have the majority of our discussion below!

Overall thoughts of the book

DK: I’d give it a four out of five. It’s missing a star because it’s just slow at some times compared to the Maze Runner, but it’s still pretty good.

LT: I’d give it four stars as well just because of, to be honest, there were a few parts of the book that didn’t need to be there.

*Can you name one?

LT: I just remember I didn’t like this one part.

DW: I actually think I would give it a 4.5 stars jsut because of the fact that they did so much detail and it made it really good and interesting but like DK said, it got slow at times.

LT: To be honest, I don’t understand why it’s still part of the Maze Runner series–i know it’s because of the characters but they aren’t in the maze.

LT: It got really

DK: It got really weird

LT: I got really angry at page 300 because one of the..girl… the second main character Teresa betrayed, but she wasn’t actally betraying, she was acting it out

DK: They weren’t meant to go together

DW: The weird part about they really didn’t know much about each other but some reason that the whole time Eris and Teresa knew that all three of them were part of Wicked-it’s good. The last few pages just don’t make too much sense because he goes to sleep in one room and he doesn’t notice anything and then wakes up and he’s in a box.

LT: At the end, Teresa started communicating to him and said where are you, they said you were already crazy from the Flare which is a disease that makes people zombie like. Described it well, he actually made friends with a couple of people-the entire group is infected with the Flare, but they aren’t crazy, but they said Thomas has gone crazy, but he actually hasn’t.

DK: Flare is going around and they are conducting tests on them to see what their reaction is and they are trying to find a cure.

Cranks: If you have the Flare long enough, you are “gone”

LT: Basically are like zombies and have control of their bodies

LT: pretty sure every single one of my responses was a tough qustion

LT: Aha moment whenever Thomas finds out Wicked is “good.”

DW: If he should stop searching for Teresa or keep on searching for her because he couldn’t find her and he said he was lost without her.

LT: What kind of world would have this storm?

DW: No matter what people do to you be strong and think you are going to survive.

LT: Have some hope

DK: I agree. They were in a tough situations.

DW: If they should trust Wicked at that moment.

Choosing Books
How Do You Choose A Book? My sixth graders responded…