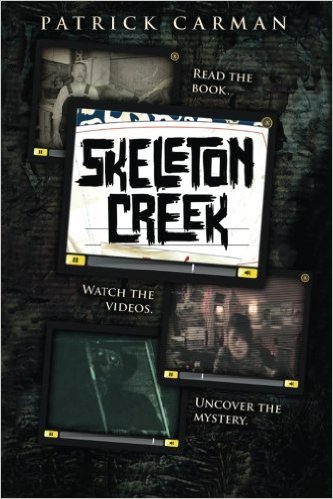 The book club group, The Ballers, finished the first book in Patrick Carmen’s series Skeleton Creek. They were immediately intrigued by the videos that went with the book. Here is our discussion after they finished.

AD: 3 Stars. I liked the beginning, it was getting interesting, but at the end it lost me.

MB: The beginning was really good, the end was a little boring, but it got you prepared for the next book.

AS: I liked the book, I’ll give it a four, I liked the beginning as well, it got my attention, like AD said, the end was boring.

AD: The videos made it more fun to read.

MB: I would give it a four.

Why do you think the author used the videos

AD: To tell more, well show more, about what is going on. It was kind of better because she was funny in the blogs and she did some jump scares and stuff.

MB: I think there’s videos to give more of a story and more action instead of just looking at what Ryan wrote. Other books, it’s just words and a story and you don’t hear voices, and with videos you get voices and you get to learn more about the character.

AD: And you get to see what the characters look like.

AS: Videos so you can see what the Dredge looks like, where it is, how scary it is. You can feel like the main characters.

AD:Ryan is boring because he … he’s not boring, but Sara is funnier.

AS: She always wants to go on an adventure.

MB: She is more action-packed and does more things than Ryan does, he pretty much writes the story.

AD: Never give up because Sarah didn’t give up. She kept going back to the dredge. Even when Ryan said no.

MB: Not be afraid of things that you don’t think are real until you actually know if it’s scary or not scary.

AS: Never give up because in the story because they keep telling Ryan and Sarah to not go to the Dredge, but they still wanted to find out what was in the dredge

Are you going to read the rest of the series?

AS: I don’t really know.

AD: If they should go back out into the dredge when she got caught by Bonner.

AD: If Sarah and Ryan should keep hanging out.

MB: Who is the secret organization in Skeleton Creek?

Have you read Skeleton Creek? Share your thoughts below!

World Kindness Day: November 13
How you can show kindness on WKD (and everyday!) World…