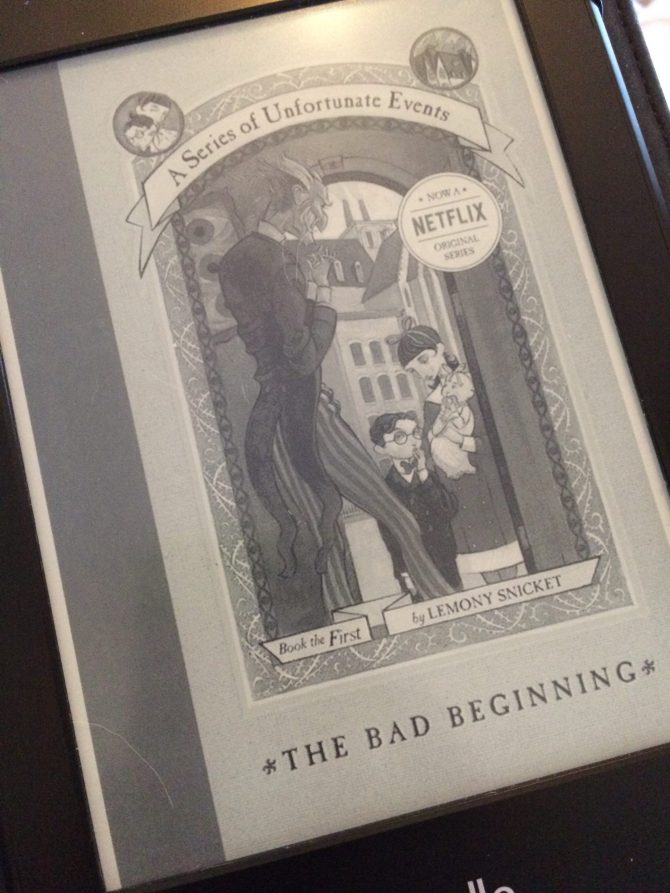 Are you made fainthearted by death? Does fire unnerve you? Is a villain something that might crop up in future nightmares of yours? Are you thrilled by nefarious plots? Is cold porridge upsetting to you? Vicious threats? Hooks? Uncomfortable clothing?

It is likely that your answers will reveal A Series of Unfortunate Events to be ill-suited for your personal use. A librarian, bookseller, or acquaintance should be able to suggest books more appropriate for your fragile temperament. But to the rarest of readers we say, “Proceed, but cautiously.” –Amazon

I chose to reread this book because it was being made into a Netflix Original Series in January. Count Olaf was being played by Neil Patrick Harris, who I enjoy watching in other movies because of his humor, and knew that I had to watch the series. However, as with movie adaptations, I had to read the books first. I had read this book several years ago, but had forgotten most oitit.

I must say, I enjoy the humor of Lemony Snicket (Daniel Handler’s “pen name”). I recently read an NPR interview with him and it focused on his inspiration for writing this series. Handler is the author’s real name and Gross is the name of the interviewer. I think it is amazing how he came up with the ideas for this series. Here is one of my favorite quotes from his interview about his parent’s influence on his reading:

One thing that they did that I just thought was fantastic was that they would read to me when I was very young and stop at a suspenseful moment. And then they would say, well, it’s now time for bed. And, you know, under no circumstances should you read with this light over here that we’re placing near your bed. Under no circumstances should you turn this on and read it.

HANDLER: And then, of course, I would. And then the next day, when the bookmark was in a different place in the book, they would read as if nothing had happened. And that, to me, seemed particularly effective. And, perhaps, that’s the root of Mr. Snicket’s don’t read this book. You’ll only end up in bad trouble.

I gave this book FIVE STARS. I loved the humor, the devestation, the love, and the way the author wrote. I love the descriptions and the vocabulary used. You can easily picture what is going on in the book and you find yourself laughing and gasping out loud. These are also small books, under 200 pages, so a relatively quick read.

I watched the first episode of the series, which is the first half of the first book. Each book has 2 episodes. I was impressed, I loved the characters they chose and the details in Count Olaf’s home. I was a little thrown off by the ending of the episode because some thing major happened that didn’t happen in the books. I don’t like when writer’s throw in other events for plot that were not in the books. However, I am going to give them the benefit of the doubt and keep reading and watching to see if maybe they just brought something to light in the series that happens later in the books.

Have you read or watched this series? What are your thoughts? I am going to read the entire series, so stay tuned!

Student Reviews: Just Under the Clouds by Melissa Sarno
Buy your copy from your local indie or from Bookshop.org!