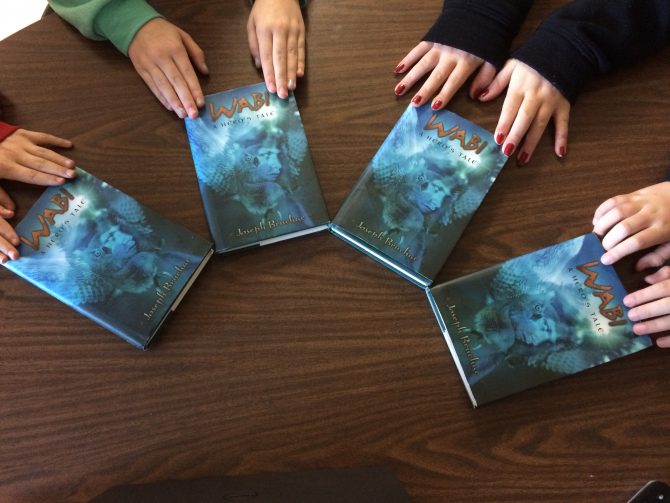 My book club group, Squad, finished Wabi by Joseph Bruchac and loved it! Read below for our discussion!

Wabi was born an owl—a great horned owl who grew to become such a strong, confident creature that he was afraid of nothing. But now he is afraid. He fears that he might never win the heart of the girl he loves. Somehow, despite his own intentions, he has fallen in love with a girl—a beautiful, headstrong human girl. And so he begins the adventure of his life. He shape-shifts into human form in order to be with her. But before he can win her love, he must face an even greater challenge in a land he comes to think of as the Valley of Monsters.

A School Library Journal Best Book of the Year

Why did you choose this book

CB: I don’t know, we kind of chose it, well HM chose it and we read the back and went along.

CB: I would give it 5 out of 5 because I like all the details it gave, how Wabi was nice and how it helped the wolf puppy. I liked that part.

EB: I probaly would give it 4 out of 5 because it got confusig to me when he turned from an owl to a human. (Not what she usually reads)

AH: I would give it a 3 out of 5 it’s just that it confused me what the author did, he had all these different types of weird names and how he started out the book.

HM: Since I usually do read books like this, I really liked it. I give it 5 out of 5. I really liked the characters, yes their names were hard to pronounce. My favorite part was whenever the Indian girl that Wabi liked, when she rejected him, it had so much emotion.

EB: Different names because it was Native American setting.

Ennis: Why do you think they did the different names?

CB: Maybe the author is Native American, so those are they names they chose.

EB: Something from his heritage

CB: Follow your dreams because he wanted to date a girl.

EB: He was helping the wolf find his wolf pack. So, helping others.

CB: Be nice to others. His brothers and sisters made fun of him for being small. Now he’s big.

EB: They pushed him out of the nest.

CB: He grew up to be bigger than both of them.

CB: Aha moment whenever he said he liked Dojihla.

EB: Again and Again he kept on trying to talk. He kept talking in the human language but they couldn’t understand him.

HM: Contrast and Contradiction: Owl life and human life. He wanted to be a human and he compared the lives.

CB: Anyone who likes animals.

CB: A quick book to read.

Have you read Wabi? If so, comment your thoughts. Thanks for reading!