Jin Wang starts at a new school where he’s the only Chinese-American student. When a boy from Taiwan joins his class, Jin doesn’t want to be associated with an FOB like him. Jin just wants to be an all-American boy, because he’s in love with an all-American girl. Danny is an all-American boy: great at basketball, popular with the girls. But his obnoxious Chinese cousin Chin-Kee’s annual visit is such a disaster that it ruins Danny’s reputation at school, leaving him with no choice but to transfer somewhere he can start all over again. The Monkey King has lived for thousands of years and mastered the arts of kung fu and the heavenly disciplines. He’s ready to join the ranks of the immortal gods in heaven. But there’s no place in heaven for a monkey. Each of these characters cannot help himself alone, but how can they possibly help each other? They’re going to have to find a way―if they want fix the disasters their lives have become.

I gave this book four stars. I like books that make me think, and this one definitely did at the end. I am still processing the whole story and how the three stories tied together in the end. I like how Yang was upfront with the stereotypes and racism felt by the characters. This is a good book to show people the struggles others face in America and how some struggle with identity and feeling like they belong. 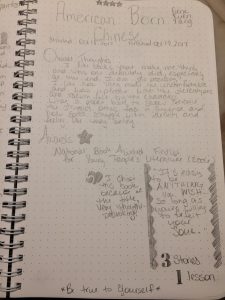 Mini Review
What grabbed me about this book was the cover. Right…

Day 24 Picture Book Frenzy: Our World is a Family by Miry Whitehill and Jennifer Jackson, Illustrated by Nomar Perez
Learn how to welcome new neighbors into your community, particularly…