Serafina and the Splintered Heart by Robert Beatty (Serafina Book 2)

Genre: Fantasy and mystery. This book has ghosts, shape shifters, and a magician. Serafina and Braeden are trying to find out what is attacking Biltomore Estate.

Theme: To stay brave in the face of danger. To be yourself. To trust your friends, no matter what.

The brave and unusual Serafina lives in the magnificent Biltmore Estate in the opulence of the Gilded Age and the rugged beauty of the Blue Ridge Mountains. But she’s caught between two worlds: she’s too wild for Biltmore’s beautifully dressed ladies and formal customs, and too human to fully join her forest kin.

Filled with history, mystery, and magic for both adults and young readers (8+), this Disney-Hyperion thriller debuted as a #1 New York Times Best Seller, earned the prestigious “Starred Review” from Kirkus Reviews, and is now being taught in over a thousand classrooms nationwide. Be sure to watch the exciting book trailer in the media section below.

Late one night while prowling through the forest, Serafina encounters a strange and terrifying figure, and then she’s attacked by the vicious wolfhounds under his control. Even worse, she’s convinced that the stranger is not alone, that he has sent his accomplice into Biltmore in disguise.

A mysterious series of attacks test Serafina’s role as Biltmore’s protector, culminating in a tragedy that tears Serafina’s best friend, Braeden Vanderbilt, from her side. Heartbroken, she flees.

Deep in the forest, she comes face-to-face with the evil infecting Biltmore–and discovers its reach is far greater than she’d ever imagined. All the humans and animals of the Blue Ridge Mountains are in terrible danger. For Serafina to defeat this new evil before it engulfs her beloved home, she must search deep inside herself and embrace the destiny that has always awaited her. –Amazon

I gave this book 4 out of 5 stars. The reason why I did not give it all 5 stars was because there were a few parts that were really drawn out. However, I really enjoyed reading another adventure of Serafina and loved how she found herself in the end. It was an amazing ending and very uplifting. I was on the edge of my seat for most of the book and there were several plot twists that were unexpected. Robert Beatty does a great job at describing a setting that feels so real, I could draw a picture. He also does a great job creating believable and relatable characters. I enjoy his writing. 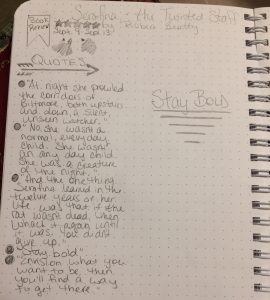 These were some of my favorite quotes. I really loved “Stay bold.”