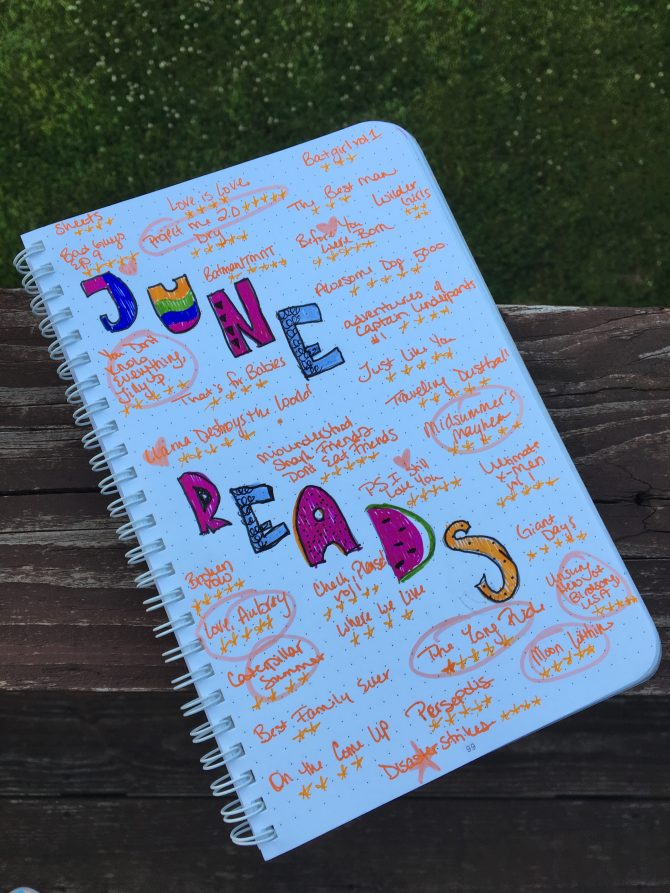 I read 35 books for the month of June!

Here is the breakdown:

**Some count for multiple categories**

Out of those 35, I have narrowed it down to 8 of my top reads and I focused on middle grade, as that is the main focus of my blog.

It must be noted that these are in NO PARTICULAR ORDER! I do not play favorites, unless it is Harry Potter. It was hard enough narrowing it down to 8…so here ya go!

Cat and her brother Chicken have always had a very special bond–Cat is one of the few people who can keep Chicken happy. When he has a “meltdown” she’s the one who scratches his back and reads his favorite story. She’s the one who knows what Chicken needs. Since their mom has had to work double-hard to keep their family afloat after their father passed away, Cat has been the glue holding her family together.

But even the strongest glue sometimes struggles to hold. When a summer trip doesn’t go according to plan, Cat and Chicken end up spending three weeks with grandparents they never knew. For the first time in years, Cat has the opportunity to be a kid again, and the journey she takes shows that even the most broken or strained relationships can be healed if people take the time to walk in one another’s shoes.

In the tumult of 1970s New York City, seventh graders are bussed from their neighborhood in Queens to integrate a new school in South Jamaica.

Jamila Clarke. Josie Rivera. Francesca George. Three mixed-race girls, close friends whose immigrant parents worked hard to settle their families in a neighborhood with the best schools. The three girls are outsiders there, but they have each other.

Now, at the start seventh grade, they are told they will be part of an experiment, taking a long bus ride to a brand-new school built to “mix up the black and white kids.” Their parents don’t want them to be experiments. Francesca’s send her to a private school, leaving Jamila and Josie to take the bus ride without her.

While Francesca is testing her limits, Josie and Jamila find themselves outsiders again at the new school. As the year goes on, the Spanish girls welcome Josie, while Jamila develops a tender friendship with a boy–but it’s a relationship that can exist only at school.

Summary Courtesy of Goodreads-Book will be published September 24, 2019

Can Mimi undo the mayhem caused by her baking in this contemporary-fantasy retelling of Shakespeare’s A Midsummer Night’s Dream?

Eleven-year-old Mimi Mackson comes from a big Indian American family: Dad’s a renowned food writer, Mom’s a successful businesswoman, and her three older siblings all have their own respective accomplishments. It’s easy to feel invisible in such an impressive family, but Mimi’s dream of proving she’s not the least-talented member of her family seems possible when she discovers a contest at the new bakery in town. Plus, it’ll start her on the path to becoming a celebrity chef like her culinary idol, Puffy Fay.

But when Mimi’s dad returns from a business trip, he’s mysteriously lost his highly honed sense of taste. Without his help, Mimi will never be able to bake something impressive enough to propel her to gastronomic fame.

Drawn into the woods behind her house by a strangely familiar song, Mimi meets Vik, a boy who brings her to parts of the forest she’s never seen. Who knew there were banyan trees and wild boars in Massachusetts? Together they discover exotic ingredients and bake them into delectable and enchanting treats.

But as her dad acts stranger every day, and her siblings’ romantic entanglements cause trouble in their town, Mimi begins to wonder whether the ingredients she and Vik found are somehow the cause of it all. She needs to use her skills, deductive and epicurean, to uncover what’s happened. In the process, she learns that in life, as in baking, not everything is sweet. . . .

An eleven-year-old boy on a quest to impress his suddenly cute, longtime friend accidentally manifests a tiny internet guru into existence in this hilarious MAX novel!

All class clown Farley Andrew Turner (yes, that spells FAT) wanted the summer before seventh grade was to give his image a little boost…and maybe, just maybe, impress his oldest pal, whom he has a secret crush on.

But when Farley accidentally manifests a tiny internet guru into existence (think genie, but far more annoying and without any ability whatsoever to grant wishes), his entire plan goes sideways.

Now, in order to rid himself of the four-inch tall pest spouting ridiculous self-help advice and doing yoga on his mouse pad, Farley must complete all “Seven Steps to a Whole New You!”—no matter how embarrassing they may be. Which is how Farley finds himself outfitted in too-small spandex and suffering through daily jogs with his super-athletic dad, attempting to read War and Peace, and agreeing to play toy guitar in his best friend Burt’s newly formed off-pitch boy band. Unfortunately, it only goes downhill from there…

But hey, no one ever claimed the path to enlightenment would be easy, did they?

The Coretta Scott King Honor-winning author tells the moving story of the friendship between a young white boy and a Black WWII veteran who has recently returned to the unwelcoming Jim Crow South.

On Gabriel’s twelfth birthday, he gets a new bike–and is so excited that he accidentally rides it right into the path of a car. Fortunately, a Black man named Meriwether pushes him out of the way just in time, and fixes his damaged bike. As a thank you, Gabriel gets him a job at his dad’s auto shop. Gabriel’s dad hires him with some hesitation, however, anticipating trouble with the other mechanic, who makes no secret of his racist opinions.
Gabriel and Meriwether become friends, and Gabriel learns that Meriwether drove a tank in the Army’s all-Black 761st Tank Battalion in WWII. Meriwether is proud of his service, but has to keep it a secret because talking about it could be dangerous. Sadly, danger finds Meriwether, anyway, when his family receives a frightening threat. The South being the way it is, there’s no guarantee that the police will help–and Gabriel doesn’t know what will happen if Meriwether feels forced to take the law into his own hands.

Jilly thinks she’s figured out how life works. But when her sister Emma is born Deaf, she realizes how much she still has to learn.

A big fantasy reader, Jilly connects with another fan, Derek, who is a Deaf Black ASL user. She goes to Derek for advice but doesn’t always know the best way to ask for it and makes some mistakes along the way. Jilly has to step back to learn to be an ally, a sister, and a friend, understanding that life works in different ways for different people, and that being open to change can make you change in the best possible ways.

Celi Rivera’s life swirls with questions. About her changing body. Her first attraction to a boy. And her best friend’s exploration of what it means to be genderfluid.

But most of all, her mother’s insistence she have a moon ceremony when her first period arrives. It’s an ancestral Mexica ritual that Mima and her community have reclaimed, but Celi promises she will NOT be participating. Can she find the power within herself to take a stand for who she wants to be?

A dazzling story told with the sensitivity, humor, and brilliant verse of debut talent Aida Salazar.

“I had everything I needed to run a household: a house, food, and a new family. From now on it would just be me and Sammy–the two of us, and no one else.”
A tragic accident has turned eleven-year-old Aubrey’s world upside down. Starting a new life all alone, Aubrey has everything she thinks she needs: SpaghettiOs and Sammy, her new pet fish. She cannot talk about what happened to her. Writing letters is the only thing that feels right to Aubrey, even if no one ever reads them.
With the aid of her loving grandmother and new friends, Aubrey learns that she is not alone, and gradually, she finds the words to express feelings that once seemed impossible to describe. The healing powers of friendship, love, and memory help Aubrey take her first steps toward the future.
Readers will care for Aubrey from page one and will watch her grow until the very end, when she has to make one of the biggest decisions of her life.
Love, Aubrey is devastating, brave, honest, funny, and hopeful, and it introduces a remarkable new writer, Suzanne LaFleur. No matter how old you are, this book is not to be missed.

So how was your month in reading? Did you meet your goals? If I keep this up, I will meet my summer bookaday goal…so here I come July!

Happy reading and thanks for stopping by!