Author and editor Cynthia Platt recently graced me with an interview. Cynthia has written numerous books for young readers and our interview was both enlightening and inspiring. Enjoy.

Alexis: Let’s start with some getting to know you questions. What are three little known or interesting facts about yourself?

1 My dream of dreams is to go to Antarctica.

2 I took up wool felting this year and LOVE it.

A: I love making lists too! I also really love checking things off of that list…but that doesn’t happen as often as I like for it too. I am going to have to look into wool felting…sounds really interesting.

What is your Hogwarts House?

C: I was really surprised when I took the Pottermore Sorting Hat quiz and got Hufflepuff, even though no one else I knew seemed to be. But I love that I got sorted into group of this brave, accepting folks. Go badgers!

A: What about your “godly” parent and Camp Halfblood Cabin?

C: As for which Camp Halfblood Cabin I’d be in, apparently my godly parent is Poseidon so I’d be in Cabin 3. Given that I absolutely need to live near the ocean (just ask my husband–it was a sticking point when we were looking for places to live!) this makes a lot of sense to me. Also, it means I get to be half-siblings with Percy, which is nothing to sneeze at!

A: What would you say is your interesting writing quirk?

C: While I wish this wasn’t the case, I often write in the middle of the night or very early in the morning (think 3:00 a.m.). As a result, I am also often tired!

A: What is the first book that made you cry?

C: It was probably Charlotte’s Web. Then when I read it aloud to my kiddo when she was younger, I sobbed all over again–as did she! The first really profound loss I experienced in a book, though, was (spoiler alert) Beth March. Not only did I adore Beth, but Jo’s grief was so real that my fifth grade self was overwhelmed. Little Woman was a life-changing book for me on so many levels.

A: Charlotte’s Web gets me every time! Beth also broke my heart, and I think it was because of Jo. She was a character I admired so much and to see her suffer tore me apart.

A: Does writing energize or exhaust you?

C: I know it seems ridiculous to say both, but…BOTH. Sometimes it’s downright exhilarating–when I’m on a roll, exploring new characters and stories. Also, I love the editing process and figuring out what’s working and what’s not and then fixing it. However–and it’s a big however–it’s so easy to feel stuck or frustrated or just plain tired (see above re: writing in the middle of the night).

Regardless, though, I do feel a need to write. My husband even told me once that I always seem happier when I’m actively writing, and who doesn’t want to write themselves into a happier place?

A: I have found that I also feel so much happier after writing. I need to do it more often though.

Alright, so now that we know you, let’s get to know your books, especially Parker Bell and the Science of Friendship.

What is the importance of writing a middle-grade book with a STEM centered plot?

C: I happen to have given birth to someone who loves science and math and engineering. On more than one occasion, people have expressed–in front of her–their surprise that she’s interested in these things. So I’ve witnessed first-hand how girls can be discouraged from their innate interest in these areas and have fought against that discouragement. So I wanted to write a story that featured a girl who’s all in when it comes to STEM–and a world in which the problems she encounters aren’t because of gender but from her personality and from the nature of science: working with others, experimenting and getting results you don’t expect, trying and failing and trying again.

Parker is someone who is smart and determined and ambitious, but who struggles a little with making friends and navigating social situations. Her struggles aren’t about learning not to be bossy or take the lead, but about how to be a good friend and how to be a good leader.

I guess I wanted to write something fun and funny but that also sent a clear message that STEM is for everyone–and is a wide umbrella that encompasses a lot of different interests, talents, and skills.

A: What is your favorite line or quote from the book?

C: It’s a little long (sorry), but I do love this little insight into Parker. She’s no shrinking violet!

“If there was one thing Parker hated, it was getting what she got. Well, also chickens. Chickens creeped her out. And she wasn’t a big fan of cauliflower. Plus, the thought of Cassie becoming friends with Theo didn’t make Parker too happy either.

There were actually a lot of things that got her peeved when she stopped to think about it. But getting what she got was definitely top ten.”

A: Describe the character that is most like you.

C: I think I was a lot like Theo when I was their age–shy, passionate about my interests, but not always able to talk about them with other people. Now, I’m probably most like Parker’s dad!

A: Thank you for sharing more about your book and your characters. Now, it’s my turn to pick your brain! Do you have any suggestions to help me become a better writer? If so, what are they?

C: I’m a big proponent of the power of “yet” when it comes to writing. Becoming a better writer is all about practice and giving yourself a chance to try and try again. I always have told the students I work with that no one is born a great writer–you have to work at it. So, read, give yourself the space to think, and then give yourself the space to experiment and make mistakes and see where that takes you.

A: What wonderful advice. Thank you! And thank you for taking the time to share more about yourself and your books.

You can order Cynthia’s book Parker Bell and the Science of Friendship here. You can also read more about Cynthia and her books on her website and follow her on Twitter.

Happy Book Birthday to The Remarkable Journey of Coyote Sunrise!
Dan Gemeinhart has done it again! A beautiful book is…

Bragging On My Students
It is NATIONAL POETRY MONTH! I have challenged myself and… 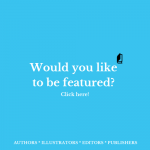