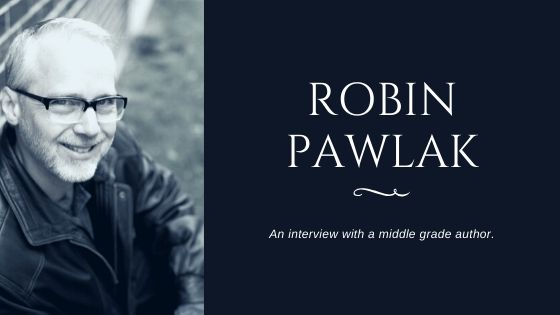 Robin Pawlak was the first author that came to my classroom virtually and he started my obsession with author visits! I am so happy to share an interview with Robin and to share his book with you all. Hearing about the importance of humor in books and the creativity in creating a new language were my two favorite parts of this interview. At the end of the interview, you will see where to follow Robin and where to order his book, Space Cadets!

2. My mother was born in England. My father was one of 10 children of Polish homesteaders on the Canadian prairies. They met when my father was serving overseas in World War II.

If you or one of your books was the answer on Jeopardy, what do you imagine the question would be?

Hmmm . . . I choose to imagine a Jeopardy episode ten years from now. Alex Trebek, in remission, is still hosting. He says, “In this bestselling children’s novel, twin siblings find themselves trapped in an alternate universe accidentally created by the brother’s imagination.”

What would you say is your interesting writing quirk?

Sometimes I get up and act stuff out. Maybe it’s because I used to teach drama. It usually happens when I need to get a feel for how things will actually work out, like in a fight scene, or how much time something will take. Whatever the reason, if anyone ever saw me they’d likely think I was insane. Which is not necessarily entirely false.

Does writing energize or exhaust you?

Both. I love creating, playing with words and ideas. That part is absolutely energizing. But there are times when it’s a grind. When the ideas aren’t flowing, or I’m just powering through the dull stuff, like proofreading, or rewriting something for the 754th time. But of course when I get to the other end of it, I can see that it has paid off and it feels pretty good. Overall I love it, which is why I do it.

When I first wrote Space Cadets, I was in my late thirties. I’d always wanted to write a book, so I just decided it was time. I spent about a year writing it. As I completed each chapter I read it to my 3 boys as a bedtime story. Their reaction told me whether it was as good as I thought it was, or if I needed to fix some things. Once I finished, I sent it off to some publishers, got a few rejections, and realized that the publishing part was the difficult bit. At the time I was super busy juggling being a husband, father and teacher, so I decided that writing would be something I’d get serious about when I retired. So for the next sixteen years, most of my writing was school-related: stories and poems to share with my class, plays for my drama students, fun little things for staff/school functions, etc.

I retired from teaching in the summer of 2016 and, after a short break, focused on my writing. Hiring an editor for Space Cadets, I realized it needed a lot of work. I spent about a year revising it, then after a nineteen-year journey, published it in January of 2018. I decided to self-publish because I didn’t want to add even more time to the process. It can take years to find a publisher, especially when you’re just starting out.

I’m working on the final revision of Space Cadets’ sequel right now, and will be releasing it in the fall of 2020. I plan to self-publish that as well, then begin a new book (or series) and pursue a traditional publisher.

Describe your book to us.

Teaching for over thirty years had a big impact on what I write, or more importantly, who I write for. I noticed that many of my students chose books with lots of action and adventure. That sounded like something that would be fun to write, especially if I threw in some humour (because . . . I just have to!).

There are a lot of very serious books out there for middle graders, books with important messages about social justice. And that’s a good thing, but it can’t be the only thing. Sometimes kids—especially middle graders—need a break from the tough stuff. Space Cadets was meant to be fun to read. If someone reads my book, then says, “That was fun! What a great story!”, then I’m a happy writer.

The villains in Space Cadets are Gamnilians, and they sometimes speak their native language. (I included a translation guide at the back of the book.) Very often, what they have to say isn’t very nice. This line is a popular Gamnilian threat which means something like, “If you try that you will die a painful death.” It isn’t necessarily my favourite line, but I did enjoy making up the bits of the Gamnilian language that are in the book.

Well this is fairly simple, but my advice to anyone who wants to get better at writing is:

I’ll leave you with a quote from the old TV series, M*A*S*H*. It is spoken by a character who is a psychiatrist, and he says it to a roomful of doctors and nurses in the middle of a very long, hard day.

“Ladies and gentlemen, take my advice, pull down your pants and slide on the ice.”

(Of course a Canadian picks a quote with ice in it, right?)

Dr. Friedman knew that the work these people were doing was life and death. He wasn’t saying they should ignore their responsibilities and go play, but that every once in a while they needed to find a way to stop and enjoy life. Have fun. Laugh! It’s vital, I think, that we not not take ourselves too seriously.

Author Feature: Hayley Barrett
All About You! 3 Little Known or Interesting Things About…

My Jasper June Blog Tour and Giveaway!
I was very lucky to have been referred by one…