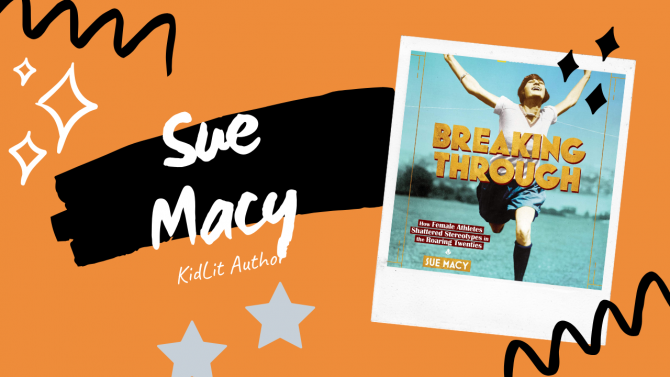 Sue Macy is the author of the nonfiction, and very motivational, book Breaking Through. This book was released February 4, 2020. Let’s get to know the author and then you can head on over to Amazon and order your copy of the book today!

I have a number of author friends and we talk about lots of things—school visits, dealing with agents and editors, etc. Probably the most amazing aid I received from an author friend was back in 2013, when Karen Blumenthal shared the audio of her interview with Sally Ride with me. She had interviewed Sally in 2003 for her book, Let Me Play, about Title IX. Sally had died in 2012, so I couldn’t interview her for the biography I was writing about her. Having Karen’s interview was wonderful. I could hear Sally’s voice and get her opinions on some issues that Karen had asked about. That was amazing!

And Again by Jessica Chiarella. It’s a debut novel about a medical experiment in which the DNA of dying individuals is cloned to create perfect, healthy duplicates of them, memories and all. It’s about second chances and how our identities are tied to our bodies as well as our experiences.

My books are nonfiction, and I think they expose readers to something they’re interested in, but might not know much about. It’s my responsibility to present the information accurately, but in an interesting way that captures the excitement I feel while I’m researching and writing about it. So I suppose I “take care of my readers” by doing exhaustive research, showing them my sources, and making the topic I’m writing about enticing for them. My “demands” on them might be to read what I write, make connections, and draw conclusions based on the information provided.

Breaking Through took about a year to write, including revisions, but is it the culmination of my decades of research on women’s sports history. As I worked on previous books, it became clear that the 1920s were a turning point for women athletes, first in a positive way, then in a negative one. It was the first decade when female athletes won widespread fame and media coverage, but that coverage led to discussions about the appropriateness of women competing as passionately as men did. Responses to those concerns would lead to a curtailment in competitive women’s sports at most colleges and high school in the United States for decades and would shape negative attitudes about female athletes that still exist in some circles today.
In 2017, when I realized that we were coming up on the 100th anniversary of the 1920s, I proposed Breaking Through to my editor at National Geographic. I started writing the book in June 2018, finished the first draft by November, and did extensive rewrites over the next several months. The book was just about finished in July 2019 when the U.S. National Women’s Soccer Team won the World Cup. I had mentioned the team’s fight for equity in the epilogue, and we quickly added a photo of Megan Rapinoe just before we went to press. The publication date is February 4, 2020.

My favorite line in Breaking Through is actually a caption for a photo that shows track star Helen Filkey in the kitchen. (See page 49.) The line is, “Helen Filkey shows that despite outperforming most other women in track competitions, she can still bake a cake.” The caption speaks to the hypocrisy of those critics who admired Helen’s skills on the track, but needed reassurance that she was domestic and feminine at heart.
Describe the character that is most like you. [Since my book is nonfiction, I’ll describe the featured athlete that is most like me.]
In my imagination I’m like many of the athletes I write about, but from Breaking Through, I would love to be worthy of comparison to any of the swimmers, such as Gertrude Ederle, Sybil Bauer, or Inez Patterson. I, too, am a swimmer, but alas, not a champion. However, I often picture myself as Trudy or Sybil or Inez when I’m doing laps in the pool, imaging myself succeeding as they did.

Write every day. Writing is a problem-solving activity. You constantly have to figure out how to get your point across clearly and directly. The more you write, the sharped your language skills are. Also, READ. Especially read the type of books or articles you want to write. I write about sports a lot, so I read the sports section of the newspaper all the time. It helps drum the rhythm and language of sportswriting into my brain.

Support women’s sports by watching them, playing them, and urging your local media outlets to cover them. Sports are a feminist issue for me. Female athletes are the personification of strong women. But sports are a lot more than just fun. They teach people to work together, come back from defeat, change course when something isn’t working. All these skills are as important in the real world—especially the business world—as they are on the playing field. Women who play sports are setting themselves up for success later in life.

Into the Tall Grass with Loriel Ryon
Introduction: About You 3 Little Known or Interesting Things About…

Author Feature: Sarah McGuire
Introduction: About You 3 Little Known or Interesting Things About…

Celebrate Multicultural Book Day and Chat with Erin Yun!
Today is a really important day that I had not…