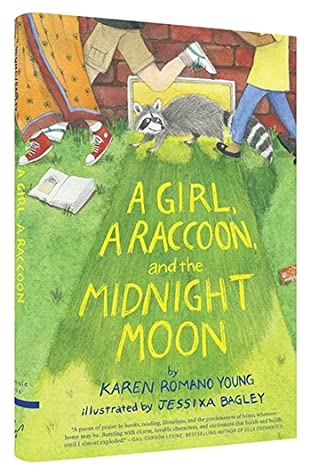 What is your writing Kryptonite?

Worrying too much about the end product. You simply can’t, just have to keep on writing the next thing.

Gail Carson Levine is my writing partner. We read each other’s stuff when we’re not sure or are feeling stuck. April Pulley Sayre helps me with nonfiction and gives me pep talks when I am feeling unconfident. It helps just to have someone else who understands how it feels to be uncertain, and who can tell you where the strengths — and sometimes weaknesses — lie.

I think about this a lot because, while I do ask a lot, I also identify with anyone who feels dumb, overwhelmed, or just tired. Timing is a big part of making this give and take work. So I’ll ask the reader to take a few steps into the challenge, then a few steps that remind them what they already know so that they feel stronger and smarter, then an example of failure — sometimes a personal story — to make them feel that they’re not alone, Rinse and repeat.

A raccoon. Smart, strong, flexible, family-oriented, loves the woods and the water — and yes, reading and writing. (See A Girl, A Raccoon, and the Midnight Moon)

I’ll talk about A Girl, A Raccoon, and the Midnight Moon, since it is the book that just came out.  It really started when I was a child who went to the library all the time — and was able to get to the know the building and the people who worked there and the books really, really well (I was obsessed) — and also was able to follow the unfolding drama of a statue whose head was stolen.  When I was the mother of young children, I took them to the library all the time, too, and while we were there one day, the son of the librarian came crashing into the room, and she said the lines on page 26. I thought, I have to write the story of the librarian’s child! I began writing this book about twenty years ago, and always was drawing to go along with it — drawing the library, the characters, even the covers of the books.

For a long time this book was finished — or so it seemed — but there was something wrong, something missing. Nobody — not my editor, not my agent, not my writing friends — could tell me what it needed.  I figured it out by drawing.

I love to paint and draw New York City storefronts, and I began working on a drawing of a newsstand — little kiosks on the corners that sell newspapers, magazines, candy, drinks, snacks, cigarettes. I used several photographs as reference, but I left the window in the middle empty, where the person running the stand would sit. I didn’t want to draw any of the people in my pictures.  In the end I got the idea — who knows where or why — to put a raccoon in there running the stand.

Then I thought of why the raccoon would be running a newsstand, and my imagination began to spin out a whole new thread of my story about raccoons that live in the library. I won’t spoil anything by saying more!

A Girl,  A Raccoon, and the Midnight Moon was published in January 2020. Prior novels are:

Video: Janine and Eric trade points of view through this story of a popular girl who becomes unpopular — then confronts a criminal.

Outside In: Set in 1968, Cherie’s story tells how she and her family respond to what’s happening in the world around them.

Cobwebs: New Yorker Nancy’s parents have spider blood; what characteristics will she develop?

Doodlebug (graphic novel): Doreen (The Doodlebug) and her family are forced to move because of her expulsion from school. As they settle into their new home, Doreen uses her artwork to control herself.

Stuck in the Middle (of Middle School) (sequel to Doodlebug): Doreen and her family want to stay in San Francisco, but they each have challenges to overcome.

Hundred Percent: Tink and Jackie have been friends forever; will sixth grade tear them apart?

No guts, no story.

Christine Gouda, Tink for short, in Hundred Percent (and also in the forthcoming Infinity School). Tall, nerdy, sweaty, sweet, in love with the world and fascinated with the people around her.

DO NOT STOP unless you are able to. Otherwise just keep writing and writing and writing. It’s your life to do what you want with. Who cares if you ever get published. Write if that’s what you want to do. (Yes, it’s true I got published. But also I draw and that has been a bumpy path, and I am beyond grateful for my opportunities. I also sing but forget it, nobody’s giving me a recording contract. And I garden and fail continually. And I do a lot of things for nobody else but me.) I tried to stop writing once because I thought I could do something else, but it turned out I couldn’t.

Sometimes you should go bike-riding instead of working and then when you get back to the work you’ll feel better about what you’re working on. Take yourself on adventures to places you haven’t been before, even if it’s just a store you never went into. Encourage your brain to expand anyway you can.

While you’re there, check out my #AntarcticLog comics about climate change.

Book Birthdays!
Today is a big day in the world of books!…