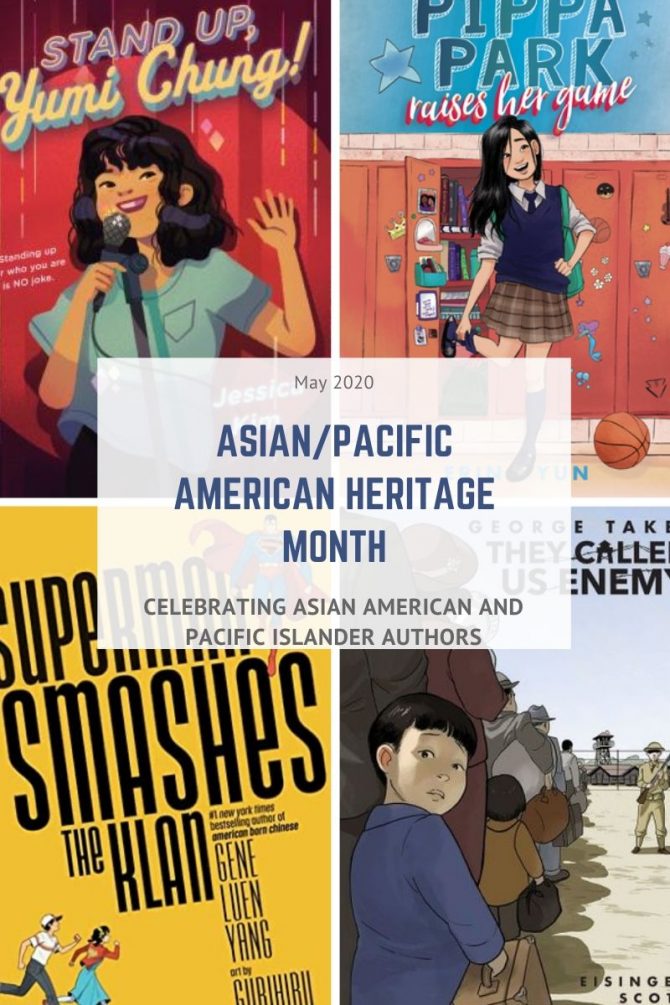 I have recently read some really fantastic books that are both written by Asian Americans and feature Asian American characters. Here is my too short list, but you can find more great books at these websites:

Inside Out and Back Again

This is a beautifully descriptive and tragic book in verse about Hà fleeing her home in Saigon during the Vietnam War and traveling to America. She is thrown into the unknown world of Alabama where she faces racists and bullies. The hope in the book that is shown through Lai’s spellbinding writing shines through, making this a book I am recommending over and over again.

Save Me A Seat

This book was cowritten by Sarah Weeks and Gita Varadarajan and is another book that I am constantly recommending and putting into student’s hands. It is also one of the few books that I usually recommend as an audiobook because of the unique character voices that are brought to life while listening. My students always love books with multiple perspectives and I think that, combined with a glimpse into another culture and the bullying/friendship theme, makes it a favorite. The two perspectives are Joe, who is navigating life without his best friend and struggling in school, and Ravi, who has just moved to America from India and trying to find where he fits in. They are both united through their common enemy, a bully, but become good friends. It is a story of friendship, hope, and understanding.

This is a hilarious story that I was able to read thanks to Libro.fm. They provide teachers with audiobooks each month and this was one of their selections. I laughed so hard through this book, but also had tears a few times. Yumi is just trying to find herself as a comedian, but feels torn between what her parents expect of her and what she wants in her life. This book is great for parents to read because it shows how we can come across too harsh and unyielding when we really are just wanting what is best for our children. It is also good for children to read to see that parents, even when we are hard on our kids, always have the best in mind for our kids. This book has strong character development and that piece mixed with the humor will make this a favorite with my sixth graders.

They Called Us Enemy

Another story of displacement, but this time at the hands of the American government. It is after the Pearl Harbor bombing in 1942 and President Franklin D Roosevelt has ordered that every person of Japanese descent on the west coast to be rounded up and shipped to a “relocation center.” These centers are thousands of miles from home and are not a replacement as a home. The Japanese Americans are held for years in shacks, with barely enough food and supplies, and constantly being patrolled by armed guards. This is no home and no place for anyone to live, especially a young child. George Takai was one of these young children and this is his firsthand account of his years behind the barbed wire fences of the internment camps. This is a must-read graphic novel.

This is a fun book about growing up and basketball. But, this book is way more than that. It is a book about a Korean American girl, Pippa Park, who is trying to find herself, but she is always being bombarded with expectations from the people are around her. It is a great story that addresses economic differences among students and what it takes to be “cool.” It will be a favorite among my sixth graders-the cover will definitely grab their attention and the realistic story by Erin Yun will hold their attention to the end.

Graphic novels are always a hit in my classroom and Gene Luen Yang is known for writing gripping, thought-provoking, and suspenseful stories. But this one, this one is unique and powerful. It is a superhero comic, which will engage and entertain my sixth graders, but it also tells a very important story that was first broadcast in the 1940s, but is now in print. It tells about a Chinese American family, the Lees, who was moved from Chinatown to downtown Metropolis, but their welcoming is less than warm. The Ku Klux Klan begin targeting the Lee family and even kidnap Tommy, the oldest boy. Along with Superman battling the Klan and saving Tommy, there also emerges a story of identity and learning to accept and embrace what sets you apart from others. This book also has some origin story in it with Superman. All in all, a fantastic and important story that I cannot wait to have in my classroom.