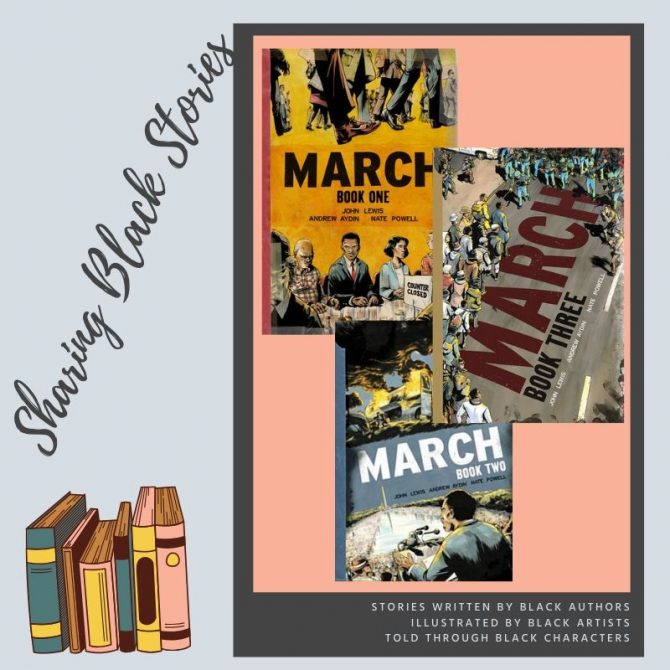 Today I am focusing on a nonfiction graphic novel series written by John Lewis, one of the youngest Civil Rights Movement leaders who walked alongside Martin Luther King Jr. Go to this website to read more about John Lewis.

This series is powerful and will have you in tears and your heart hurting at the violence that you will see. But, this series is a must read for all of us. It shows the struggle, the perseverance, and the strength of the Civil Rights Movement.

Here is a summary from Goodreads. You can also purchase at Bookshop.org.

Before he became a respected Congressman, John Lewis was clubbed, gassed, arrested over 40 times, and nearly killed by angry mobs and state police, all while nonviolently protesting racial discrimination. He marched side-by-side with Martin Luther King as the youngest leader of the Civil Rights Movement that would change a nation forever.

Now, experience John Lewis’ incredible story first-hand, brought to life in a stunning graphic novel trilogy. With co-writer Andrew Aydin and Eisner Award-winning artist Nate Powell, John Lewis’ MARCH tells the story of how a poor sharecropper’s son helped transform America, from a segregated schoolhouse to the 1963 March on Washington and beyond.

Common Sense Media states that this book is appropriate for ages 12 and up. I have read all three books and would say that most of my sixth graders could read this book and understand the history and importance, but they would need someone to go to when they have questions. It would be a great book to read as a family or in a book club so you could have discussions while reading.

I Wonder-Enrichment Class
Tiger Focus-Enrichment The Program In our school, we have a…

Countdown to DC’s Teen Titans: Beast Boy by Kami Garcia and Gabriel Picolo
Today marks ONE MONTH for the release of the next…