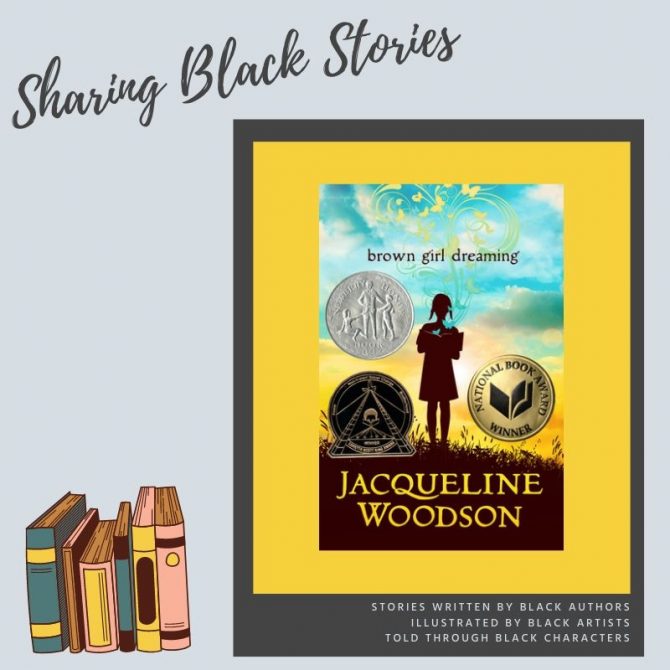 Jacqueline Woodson, one of today’s finest writers, tells the moving story of her childhood in mesmerizing verse.

Raised in South Carolina and New York, Woodson always felt halfway home in each place. In vivid poems, she shares what it was like to grow up as an African American in the 1960s and 1970s, living with the remnants of Jim Crow and her growing awareness of the Civil Rights movement. Touching and powerful, each poem is both accessible and emotionally charged, each line a glimpse into a child’s soul as she searches for her place in the world. Woodson’s eloquent poetry also reflects the joy of finding her voice through writing stories, despite the fact that she struggled with reading as a child. Her love of stories inspired her and stayed with her, creating the first sparks of the gifted writer she was to become.

Learning about Jacqueline Woodson’s early childhood was an amazing experience and really made me value her stories even more. Her voice is so poetic and the way she tells her stories, it just makes you feel like you are there. I really liked how she showed her innocence as a child, yet was still able to show what was going on in the world around her. This is a powerful book.

“But on paper, things can live forever.

On paper, a butterfly

“Then I let the stories live

inside my head, again and again

until the real world fades back

and my own dreams.”

Happy Book Birthday to the Unsung Hero of Birdsong, USA!
Brenda Woods is a winner of the Coretta Scott King…

BlogTour: After the Green Withered by Kristin Ward
Something amazing is going down right now in the blogosphere-a…