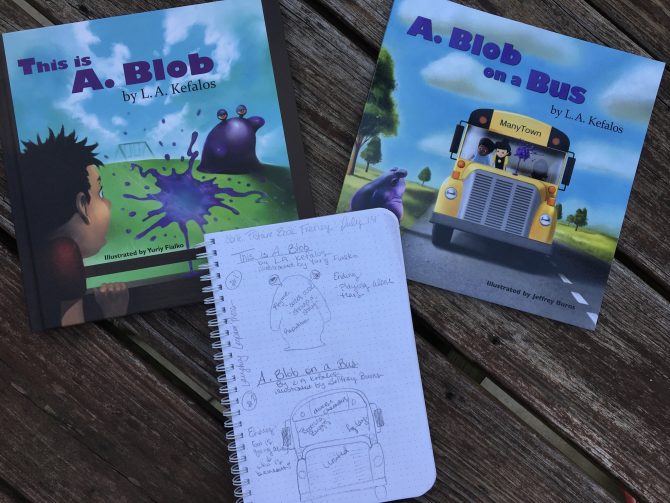 Laughing Leopard Press reached out and asked me if This is A. Blob and the sequel, A. Blog on a Bus, would be good reads for the Lit Review Crew. I said yes, and now it is time to share this blob with my followers!

Here is an excerpt from Laughing Leopard Press describing This is A. Blob:

This is A. Blob is a masterfully illustrated picture book suitable for children ages 4-8. Written by Lori Kefalos, author of several animated shorts, including “Who’s that Knocking,” “Chug,” and “Croc, Pots and Wildebeests,” which was nominated for Best Independent Short Short, Ages 5-8, at the 2009 Kid’s First Film Festival and for best short at The Los Angeles Women’s International Film Festival, This is A. Blob is the first of a series following this bully.

This first installment follows the antics of A. Blob, a slimy, purple, blob-like creature who wreaks havoc on the elementary school playground with its bullying ways. As the story progresses, however, readers learn that A. Blob may have more than meets the eye.

Along with its powerful illustrations and rhymed verse for early readers, this story invites children to put themselves in the shoes of another. The book encourages readers to consider why bullies behave the way they do – and start to consider what can be done to help.

I really enjoyed the rhyming and the repetition. The word choice was also well done. I think this would be a good book for teachers to share with students about bullying along with other writing lessons.

Here are a couple of my favorite lines:

Finally, the ending would be a great lesson for students to write what they think may happen in the next book and what they would do if they were A. Blob.

The second book was just as awesome as the first, with strong figurative language (booming buggy). It also had a fantastic ending that makes me REALLY WANT the next book! I have got to see what is inside the goo!

Favorite Books In Verse
In honor of National Poetry Month, I have generated a…