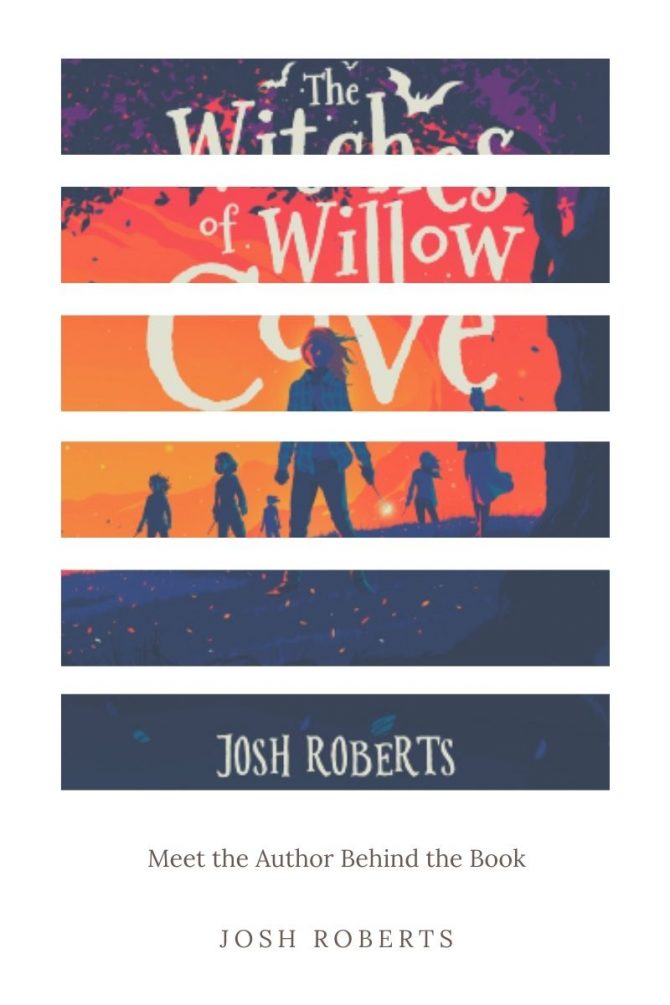 I am so happy to have Josh Roberts visit the blog today! Let’s take some time to get to know him and then we can learn about his new book and see what advice he has for us writers.

1. I grew up in a spooky Victorian funeral home.

2. I used to work at Marvel Comics.

3. I have climbed mountains on five continents.

I’m always sorted into Gryffindor, which is FINE, really it is. I mean, I like Gryffindor, and obviously Hermione Granger is a Gryffindor, and she’s THE BEST, so it’s not an awful result. But… I really want to be a Ravenclaw. Not only are their colors the best, but I would also very much like to be known for my intelligence, wit, wisdom, and creativity. Alas!

If you or one of your books was the answer on Jeopardy, what do you imagine/wish the question would be?

Which book took 10 years to write but can be read from cover to cover in a single day?

What would you say is your interesting writing quirk?

I’m a perfectionist by nature and an editor by profession, so writing a messy first draft is very difficult for me. At the same time, I’ve learned that some of the very best story decisions can only surface when you allow yourself to be messy and make mistakes.

So, I came up with a system in which I write my messiest, fastest, sloppiest stuff in a different font color (usually red) than I do the more polished parts of the story (which I change to black when I’m happy-ish with them). Anything in red “doesn’t count.” Oddly, the messy stuff doesn’t bother me when it’s a different color. Just don’t even think of changing it to black until I’m ready to commit to it!

What is the first book that made you cry?

The High King by Lloyd Alexander, which I read when I was maybe 10 or 11 years old. It made me cry because it’s the final book in the Prydain Chronicles, and finishing it felt like saying goodbye to some of my best friends. The knowledge that I’d never again spend time with them on new adventures was very upsetting to me at that age. It was my first brush with the book grief that comes with finishing a great story. Fortunately, as I’ve grown older I’ve discovered the joy of revisiting favorite books, including Taran the Assistant Pig-Keeper and Eilonwy of the Red-gold Hair.

Does writing energize or exhaust you?

It depends on how well it’s going. If I’m honest, first drafts are exhausting because they are SO HARD for me. I much prefer working with words already on a page. The act of revision, on the other hand — taking that messy first draft and polishing into something that feels “just right” — that’s energizing. I can revise all day long. It’s the whole “putting something witty and original on the blank page” that’s absolute torture to me. (Hmm, maybe that’s why they never let me into Ravenclaw?)

I hinted at this earlier, but THE WITCHES OF WILLOW COVE took me about 10 years to write. I tell people it’s the book that taught me how to write a book because I rewrote it so many times and learned a new lesson each time. My first draft was 150,000 words, which — if you know anything about middle grade fiction — was clearly way too long! I wrote that first draft at odd hours while working full-time as a writer and editor for an online travel magazine and raising two very young children with my wife.

Then I suffered an injury to my wrists from too much typing (another argument for shorter drafts…) and took a few years off between the first draft and the second draft. When I returned to the manuscript with fresh eyes, I was able to trim it quite a bit (the final published book is exactly half as long as the first draft) and keep writing and rewriting until I felt hopeful that I had something worth sharing.

After that, the process was mostly about querying, more rewrites, and trying desperately to convince people that the literary world needs more 13-year-old protagonists, even if there’s no easy check box for stories that aren’t quite middle grade (typically 8- to 12-year old characters) and also not quite YA (16- to 18-year-old characters).

I had actually given up and finally moved on to another novel when I got the email that changed my life and set this book on the road to publication. And now here we are with the book publishing on May 26, 2020, and a sequel on the way!

This book became a sort of contemplation on friendships: what they mean, how they change, and why they’re important to us. My main characters, Abby and Robby, are “just friends.” But as Robby’s father tells him at one point, “Being there for each other, being part of each other’s lives through all the ups and downs – there’s no just about that. It’s everything.”

There’s another line, too, that I particularly like, and that’s, “Nobody is just one thing.” We’re not defined by one act, or one quality. We contain multitudes.

It’s cheating, but I feel like they are all like me in some way, even the ones who have clearly negative traits. At times I can be bold like Abby, but also a bit reckless like her, too. I try to be a loyal friend like Robby, but I’m also a bit of a dork like him, too. I’ve been known to be cynical and snarky like Amethyst, flighty and theatrical like Daisy, and maybe even brooding now and then like the mysterious Miss Winters. I love them all, even my villains, and I think I ended up putting some of the best and worst parts of myself into each of them.

Find time to write as often as you can, even if it means stealing moments at lunch, or before breakfast, or late at night. Nothing improves your writing like actually doing it, not being satisfied with the results, and then getting back on the wagon and doing it again and again.

Also, find critique partners you trust and respect. It’s helpful to get feedback on your work, but it’s equally helpful to provide feedback to others. You can learn a lot by understanding what you are and aren’t responding to in someone else’s writing. Critique groups are a great place to make friends, too, which can definitely make the lonely act of writing feel a bit less lonely.

Don’t judge your early drafts too harshly. Give yourself permission to not be perfect right out of the gate. Keep writing, keep striving, and eventually you will break through.

Where can you find Willow Cove?

Signed copies (shipped to US and Canada)

Would You Rather Be In A Room Full of SNAKES Or SPIDERS?
Welcome to the first question in the Would You Rather…
Susan Lubner- Master of Escaping from Dog Crates! Oh…and Master Author!
Introduction: About You 3 Little Known or Interesting Things About…