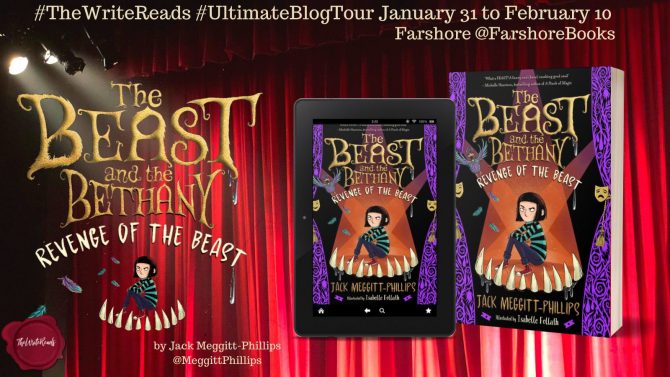 Write Reads is back with another blog tour, this one featuring the middle grade fantastical sequel to Bethany and the Beast!

I listened to the audio of the first book and loved the narrator, but reading the sequel and seeing the illustrations makes me want to reread the first! The illustrations are icing on the cake to this hilarious middle grade story.

So what’s it about?

Lemony Snicket meets Roald Dahl in this riotously funny, deliciously macabre, and highly illustrated sequel to The Beast and the Bethany in which Bethany and Ebenezer try to turn over a new leaf, only to have someone—or something—thwart them at every turn.

Once upon a very badly behaved time, 511-year-old Ebenezer kept a beast in his attic. He would feed the beast all manner of objects and creatures and in return the beast would vomit him up expensive presents. But then the Bethany arrived.

Now notorious prankster Bethany, along with her new feathery friend Claudette, is determined that she and Ebenezer are going to de-beast their lives and Do Good. But Bethany finds that being a former prankster makes it hard to get taken on for voluntary work. And Ebenezer secretly misses the beast’s vomity gifts. And neither of them are all that sure what “good people” do anyway.

Then there’s Claudette, who’s not been feeling herself recently. Has she eaten something that has disagreed with her?

Jack Meggitt-Phillips is an author, scriptwriter, and playwright whose work has been performed at The Roundhouse and featured on Radio 4. He is scriptwriter and presenter of The History of Advertising podcast. In his mind, Jack is an enormously talented ballroom dancer, however his enthusiasm far surpasses his actual talent. Jack lives in north London where he spends most of his time drinking peculiar teas and reading P.G. Wodehouse novels.

Buy your copy or request from your local library!