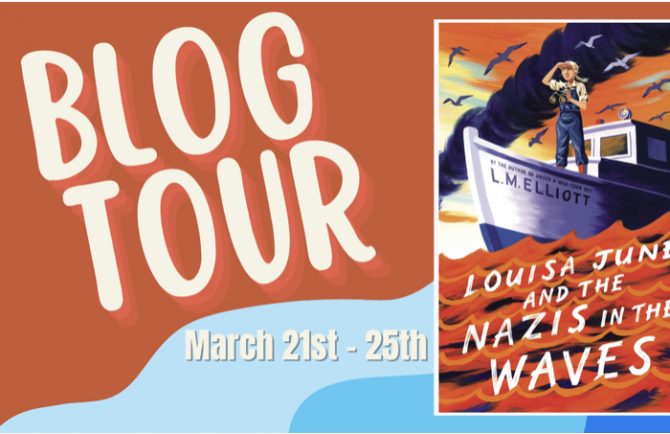 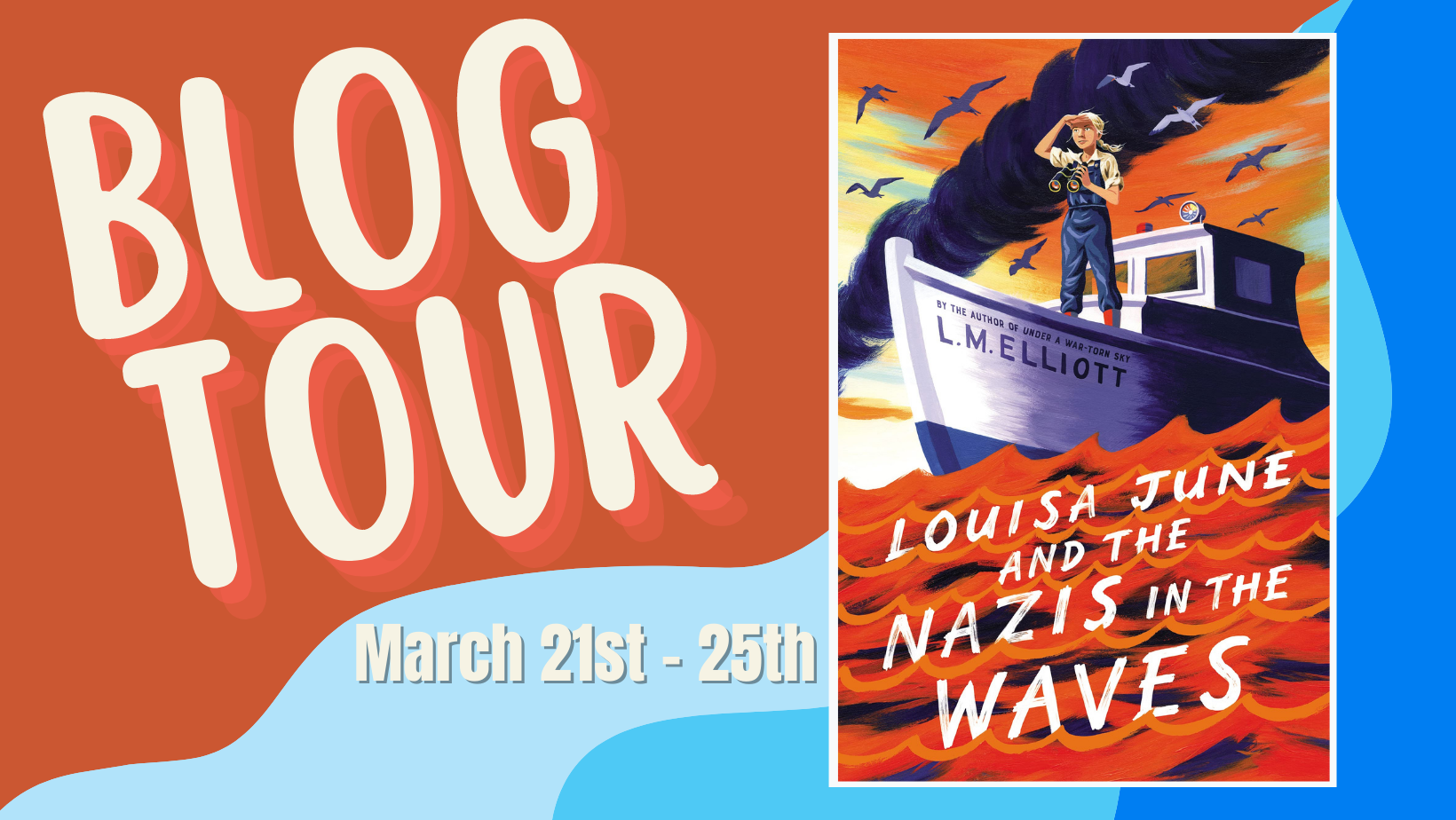 Welcome to the Louisa June and the Nazis in the Waves Blog Tour!

“…It’s hard for a being not to get lost in a swell of inky agony ever since the war arrived on our Tidewater Virginia doorstep. Ever since Nazi U-boats started swarming the waters around the Chesapeake Bay, lurking in the waves.”

Louisa June and the Nazis in the Waves is about a little-known aspect of WWII: A few days after Japan’s surprise attack on Pearl Harbor, Hitler unleashed a “wolfpack” of U-boat submarines to our East Coast. Their mission: to torpedo as many U.S. cargo ships carrying fuel, supplies, and food as possible. They typically attacked in the dark of night, without warning.

The first two sinkings occurred in January 1942, just off Cape Cod and then Long Island. A week later a U-boat took down an oil tanker near Norfolk, Virginia, where the Chesapeake Bay meets the Atlantic. The waters around Tidewater Virginia—Louisa June’s world—became a favorite hunting ground for the Nazis subs. When the war brings her sudden tragedy, Louisa June must embark on a perilous sail of her own, looking to help her grieving parents and determined to somehow combat Nazis herself.

My hope is Louisa June will “humanize” WWII history lessons for young readers in general and shine a new light on our brave sea-connected families during WWII—by giving them a plucky, savvy girl to root for.

I also hope Louisa June will really resonate with some of the challenges my readers might face in their own lives right now. I wrote her story during the worst of COVID, as we grappled with its unforeseen, deadly menace. The lightning quick aspect of the pandemic is not unlike that of Nazi U-boats suddenly appearing along our coastline, torpedoing ships at a staggering rate of one a day during the spring of 1942. Life turns on a dime and with earthquake force for Louisa June as she faces the shocking, out-of-the-blue death of her beloved brother—a loss similar in its grief to the death of immediate caregivers (parents, grandparents, extended family) which the NIH says close to 150,000 children under the age of 18 are currently grappling with because of COVID.

I hope those readers find hope in Louisa June’s strength and journey to healing, and that their friends, who were luckier, find compassion and understanding of the grieving process.

Louisa June’s elderly Cousin Belle advises her: “Don’t dismiss it. Stare sorrow in the face. Recognize the pain for what it is. Then it will back down a tad and walk beside you, maybe give you a little bit of a limp for a while, or for forever. But it will not undo you or sneak up on you from behind in a surprise attack. Of course, facing sorrow head-on and accepting its presence takes honesty, courage, and a bit of spit. Which you have in spades, child.”

These are the first words we hear from Louisa June: “My mama has the melancholy. Always has. But recently it’s gone from her customary pinkish-gray—like a dawn mist in the marshes, still hopeful and able to clear into bright blue with the right sprinkle of sunshine—to thick, storm-surge purple black.”

My own mother suffered terrible depression when I was a child during the 1960s, before today’s vastly improved and effective treatments. So I, like Louisa June, grew up watchful, always assessing my mother’s mood to know how to act, how I might help. I, too, filled my mind’s pockets with little amusing stories and “somethings nice,” as Louisa June’s mama calls them, to cheer her up.

My goal is that Louisa June will help my teen and ‘tween readers who might be in a similar situation to feel seen and understood. To be encouraged by the supportive example of Cousin Belle to ask adults they trust for help, especially in this time of increased, COVID-sparked mental health disorders.

Finally, please know that Louisa June has light, funny moments and endearingly eccentric characters as well! Take Louisa June’s quirky friend, Emmett, with his outrageous plans and wild ideas that he convinces her to join in on.

“You know the tides are coming in higher these days because of all them Nazi tinfishes floating around out there, right?”

Emmett is one for half-baked conspiracy theories. “I don’t think a bunch of submarines can make the entire ocean level rise, Emmett.”

“LJ, you don’t have no imagination, do you?” Emmett drew his twelve-year-old-self up tall and looked at me with pity for my limited brain power and tried to explain his higher understanding of the universe. “You ever take a bath? Maybe you take a jug and put it down to collect water for rinsing your head? And the water rose up when you did?”

Shrugging, he ignored my disbelief. “Well, they’re out there, LJ. Thick as sharks. I ain’t gonna stand by and do nothing. I’m going to build me an observation tower and join the Confidential Observers.”

In addition to Emmett, there’s LJ’s sassy big sister. Cousin Belle is a bodacious, outspoken great-aunt/cousin who collects stray cats, (or should I say they collect her), and names them for Musketeers. A pig chase. Netting for elvers that instead lands a whale of an eel.

And eventually, a life-changing, harrowing search-and-rescue.

So, to my readers: Louisa June is for those of you who love a good adventure story. For those who may have lost someone you deeply love or whose parents struggle to climb out of melancholy. And especially for all of you who—like Louisa June—try to help others and in the trying find your own strength.

There’s a line from Kirkus’ starred review of the novel I really love, which says Louisa June’s story celebrates “the uplifting strength of no-nonsense friendship.” Like a good friend might, I hope Louisa June and the Nazis in the Waves makes you laugh, makes you cry, makes you think, and gives you hope—and becomes a book you want to spend time with, again and again.

For more about Louisa June, please visit my webpage. 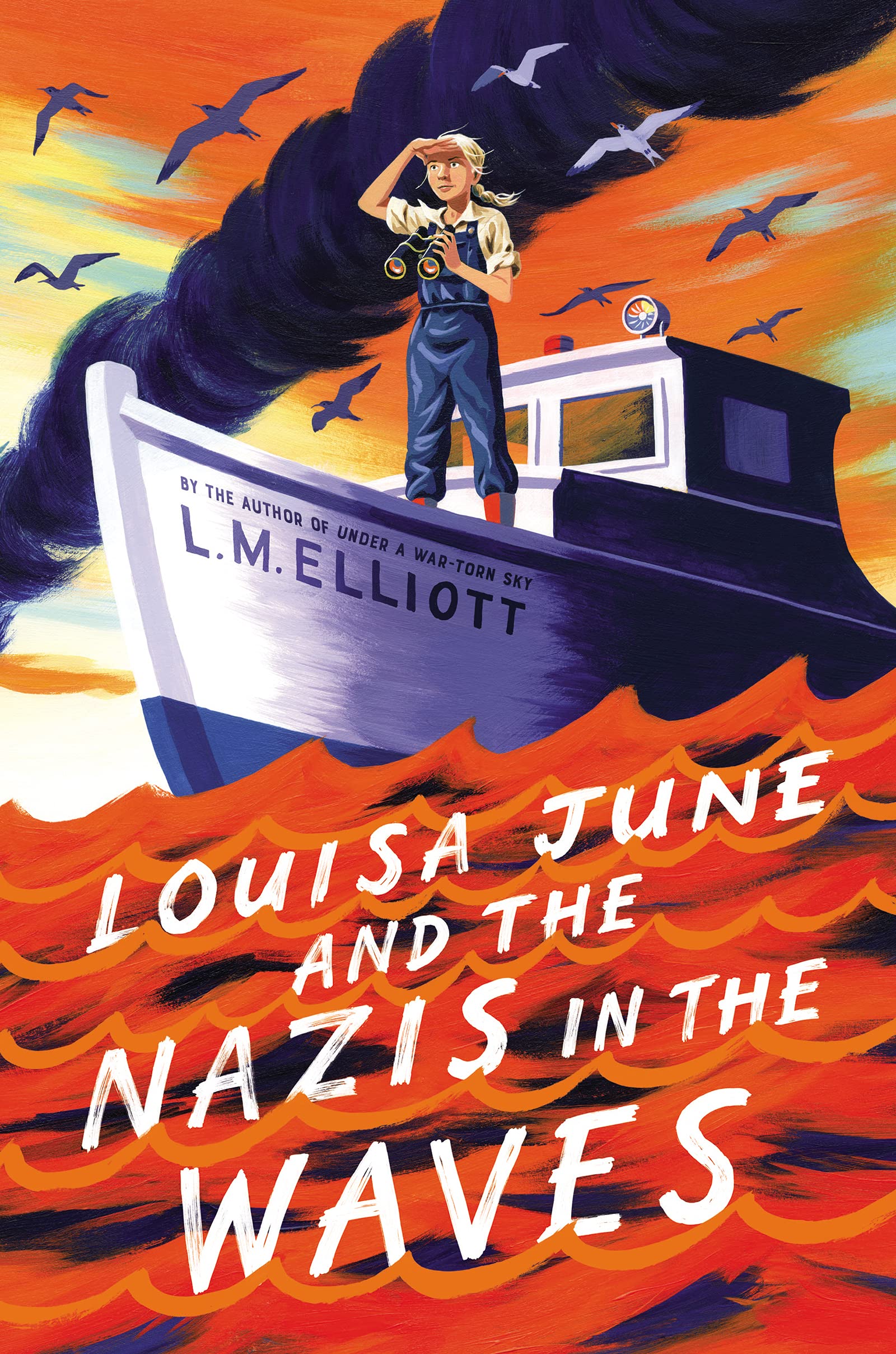 "Evocatively threaded with the scents and sounds of Tidewater Virginia coastal communities, this story presents a fascinating, lesser-known aspect of the war told from a young girl’s perspective. Successfully tackling the devastation of depression on family relationships, the bitter cost of war, and the uplifting strength of no-nonsense friendship, this story has impressive depth. Superb."
—Kirkus Reviews (starred review)

"Elliott weaves a deeply moving historical tale, including small but significant details that flesh out the situations and characters, even the secondary ones. The extensive and fact-filled backstory in the author's note gives readers even more context. An excellent middle-grade read that balances adventure, emotions, and family."
—Booklist (starred review)

In this moving and timeless story, award-winning author L. M. Elliott captures life on the U.S. homefront during World War II, weaving a rich portrait of a family reeling from loss and the chilling yet hopeful voyage of fighting for what matters, perfect for fans of The War That Saved My Life.

Days after Japan’s attack on Pearl Harbor in 1941, Hitler declared war on the U.S., unleashing U-boat submarines to attack American ships. Suddenly, the waves outside Louisa June’s farm aren’t for eel-fishing or marveling at wild swans or learning to skull her family’s boat—they’re dangerous, swarming with hidden enemies.

Her oldest brothers’ ships risk coming face-to-face with U-boats. Her sister leaves home to weld Liberty Boat hulls. And then her daddy, a tugboat captain, and her dearest brother, Butler, are caught in the crossfire.

Her mama has always swum in a sea of melancholy, but now she really needs Louisa June to find moments of beauty or inspiration to buoy her. Like sunshine-yellow daffodils, good books, or news accounts of daring rescues of torpedoed passengers.

Determined to help her Mama and aching to combat Nazis herself, Louisa June turns to her quirky friend Emmett and the indomitable Cousin Belle, who has her own war stories—and a herd of cats—to share. In the end, after a perilous sail, Louisa June learns the greatest lifeline is love. 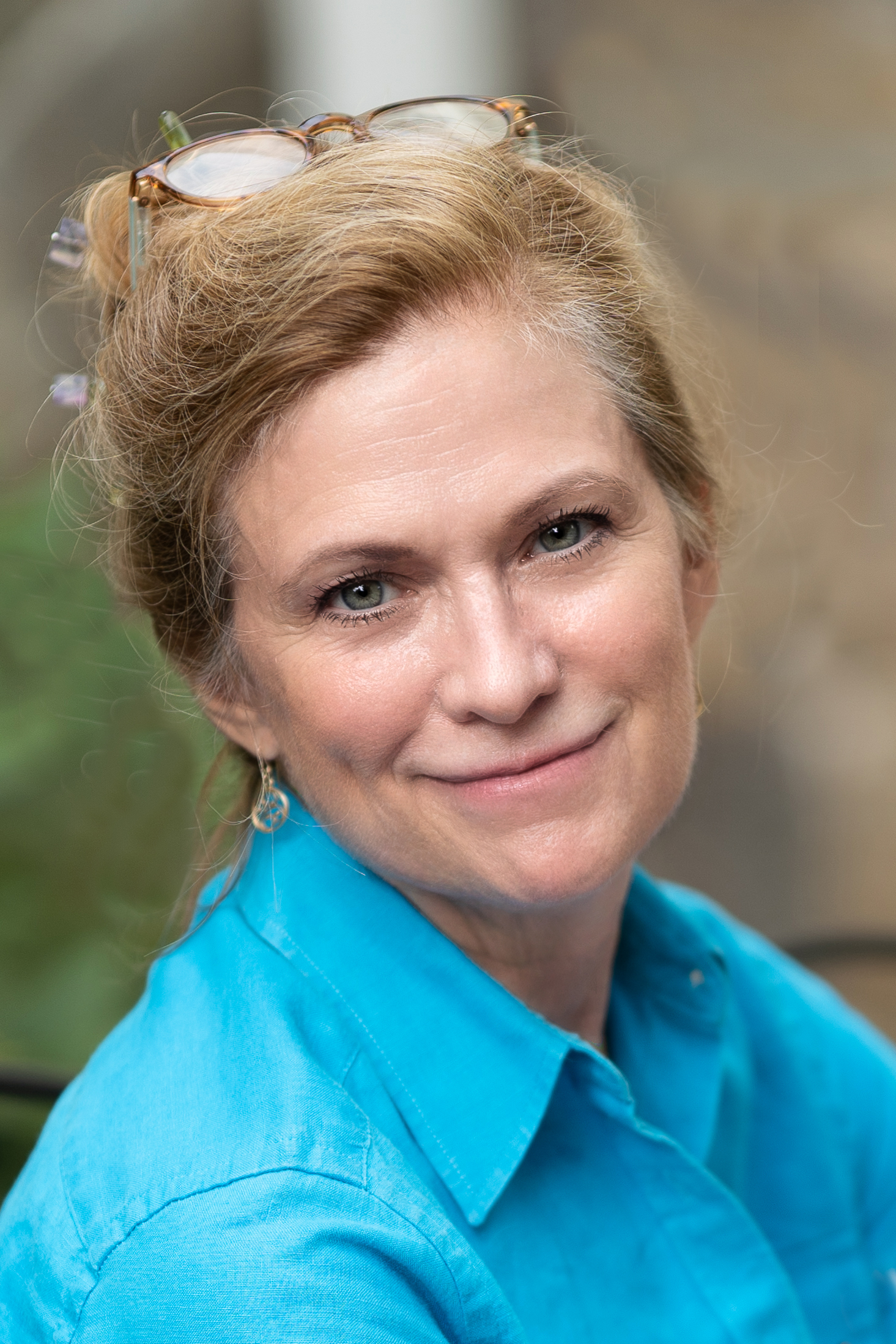 L. M. Elliott was a magazine journalist covering women’s issues, mental health, and the performing arts for twenty years before becoming a New York Times best-selling author of historical and biographical fiction. Her twelfth and latest, Louisa June and the Nazis in the Waves, is set in Tidewater Virginia during the deadly U-boat attacks on our coast in 1942. Her novels explore a variety of eras (the Italian Renaissance, the American Revolutionary War, WWII, and the Cold War), and are written for a variety of ages. Her works have been named NCSS/CBC Notables, Bank Street College Best Books, Jefferson Cup Honor Books, Kirkus Bests, and Grateful American Book Prize winners. Learn more at www.lmelliott.com and Twitter or Instagram @L_M_Elliott. 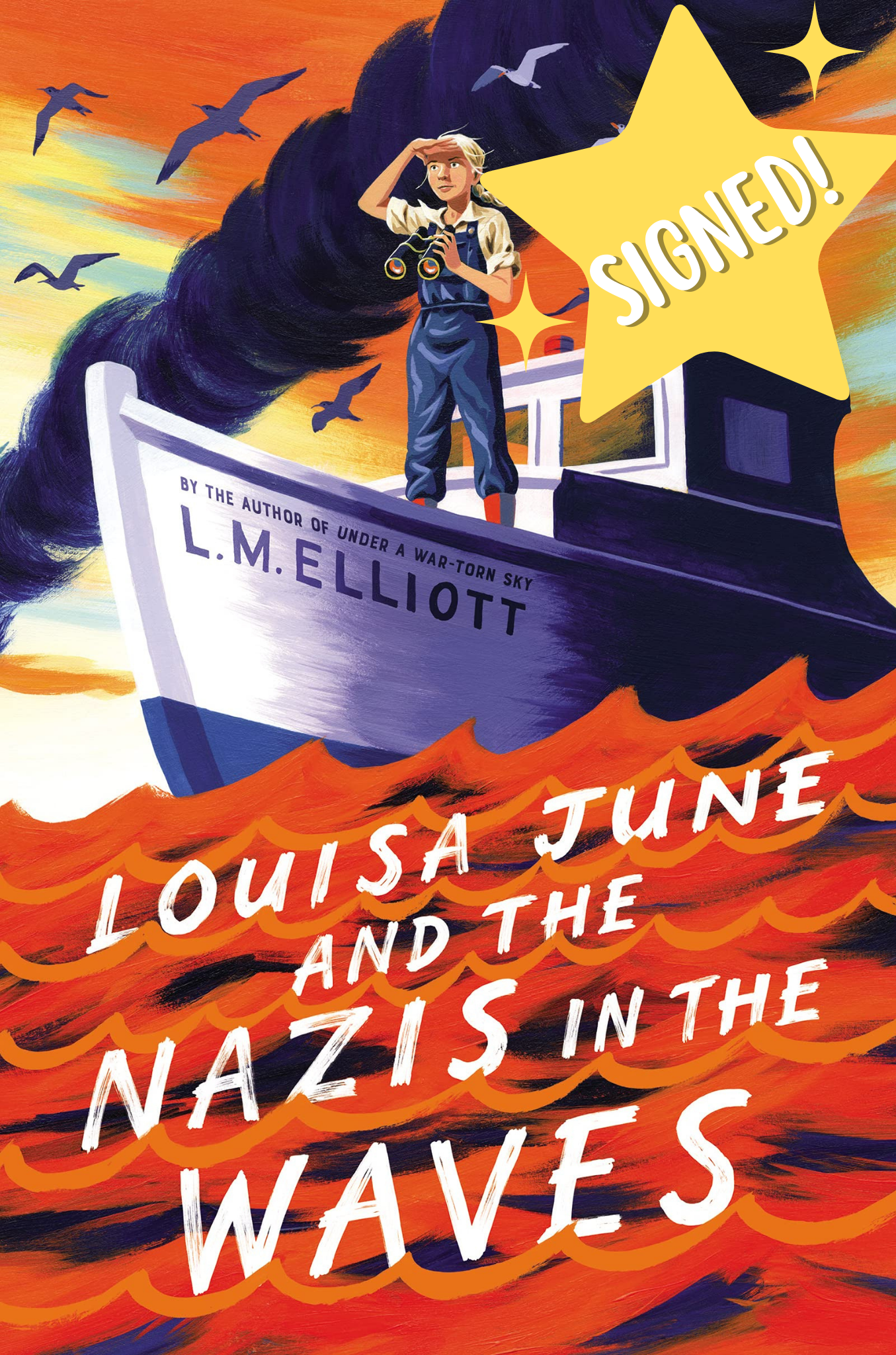 First Glance: Sing Like No One’s Listening
The cover is BEAUTIFUL and caught my eye immediately. The…
There are 11 comments for this article