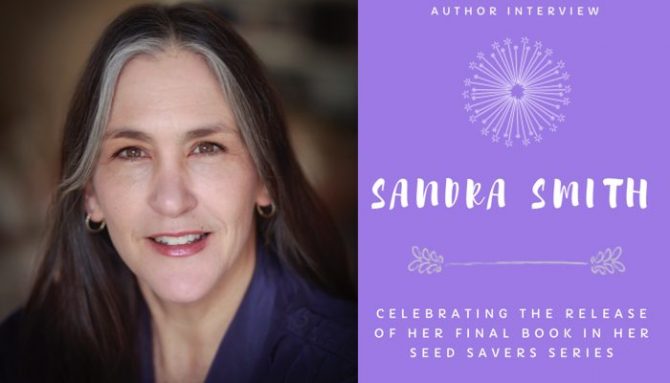 Hello Sandra! I am so excited to talk to you today about the release of the final book in your series, Seed Savers. Thank you for being here.

You’re welcome! Thanks for having me, Alexis.

Let’s start with some ice-breaker questions.

I’m afraid I’m a little disappointing with either/or questions as I’m more of a both/and sort of person, but here goes…

I like tea a lot, but I usually start my morning with coffee. Mostly a habit I picked up from my husband.

I’m definitely a morning person, but probably most of the first two Seed Savers books were written at night since I was teaching full-time and I had kids at home. Now that my schedule is flexible I write whenever works best … not excluding afternoons. 🙂

I love both pens and pencils. They each have their moment.

Now that we have some basics out of the way, here are a few more questions I have for you:

I know writing and creativity is generally messy, so I am curious, what does your desktop and/or notebook look like right now?

A terrible mess. Literal desktop, virtual desktop, kitchen 🙂 … Although when I really need to get down to business I try to tidy up first.

I am Slytherin, what is your Hogwarts house? If you haven’t been sorted yet, why not and what house do you think you would be in?

I have not been sorted. I do so badly on being categorized. It’s this Gemini sign of the twins thing, I always end up right in the middle. Even with Myers-Briggs. Maybe I should give it a whirl. I’d probably be Hufflepuff.

Thank you for sharing all of that with us.

Now, let’s talk about your book, Unbroken. This is the fifth and final book in your Seed Savers series. This series is a dystopian, but with a topic that could happen in our lifetime. I find these kinds of stories scarier than the worst ghost story. What would happen if we were not able to grow anything? If flavors were all artificial? Your series really sparks some thinking about real issues and I think that is a really great thing.

Thanks! Some people do think the books are scary because they are too close to reality. But I think they are hopeful. And the first couple of books really make you want to go eat fresh food!

I read that you garden a lot, even in the city, so tell me what really got you inspired to write a series about seeds and gardening that was also dystopian?

The inspiration came to me while I was watching the documentary, Food, Inc. There was a story about a man whose business was seed cleaning for farmers (cleaning the seeds for the next year’s planting). This man’s business was ruined by MONSANTO because of accusations and lawsuits regarding the seed, ownership, patents, etc. Aside from the questionable issue of seed ownership, I found myself saying, “His occupation is a seed cleaner? I never heard of that; here is an occupation that’s dying out and I didn’t even know about it.” And then one thought led to another, “What if someone had never heard of a seed?” and Seed Savers was born. The first book starts with three children pondering a tiny seed given to them by an older person and wondering what it was and how it could make food.

When you were writing book one, did you already know that this story would span five books?

I had no idea. I was still teaching middle school and my students were all students who spoke English as a second language. I thought it would be a fairly simple book that was accessible to them. The popular books at that time were the Twilight books which were really enormous books for my kids to take on. By the end of Seed Savers-Treasure I knew it would be a series.

Vastly different. My first three books I wrote entirely in longhand in notebooks. I’m a panster, so there wasn’t a great deal of planning; I let my characters take the lead. By book five I had so many characters, storylines, settings, etc., it was all very complicated. Finishing up a series means you need to know how it’s all going to end. And then how to get there. The big questions: Will someone die? Will the good guys win? What about the bad guys? Do we even know who the good guys and bad guys are? Will my readers hate it if such and such is revealed? I honestly procrastinated for quite a while. I actually wrote an entire other novel (not Seed Savers) in between the fourth and fifth book.

Thank you for your time and your insightful interview and congratulations on your book release!

Thank you! I am so excited to be finished!

What words of wisdom would you like to leave with us today?

Mm. Get outside on the perfect summer day (about 75 degrees for me), find a great book, pour something cold, and just relax for a bit. 🙂

To read more about Seed Savers or Sandra Smith, visit her website!

Don’t forget to go order a copy of the final book in her series here.

Author and Illustrator Feature: Amy Newbold and Greg Newbold
I was fortunate enough to interview both Amy and Greg…
Jenna Zark: Author, Playwright, and Singer
Introduction: About You 3 Little Known or Interesting Things About…

Celebrate Multicultural Book Day and Chat with Erin Yun!
Today is a really important day that I had not…