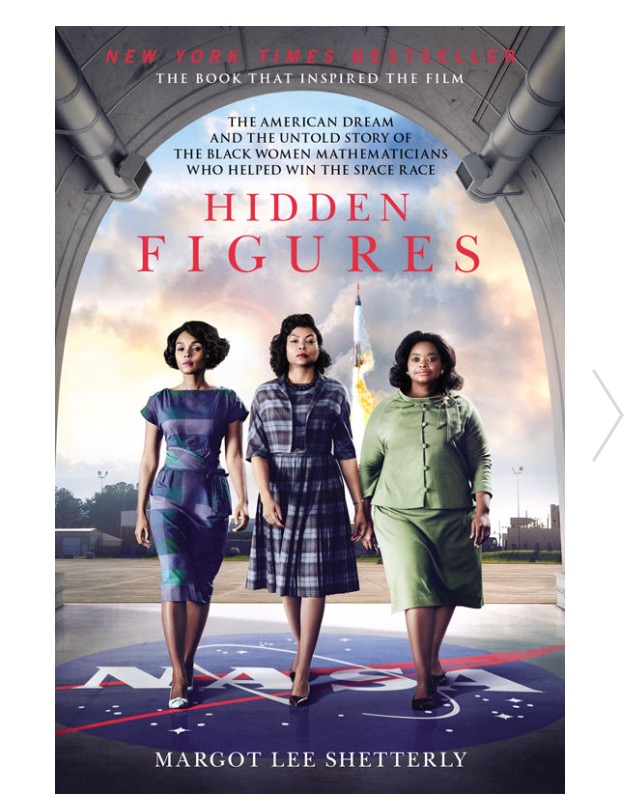 Hidden Figures: The American Dream and the Untold Story of the Black Women Mathematicians Who Helped Win the Space Race by Margot Lee Shetterly

Before John Glenn orbited the earth, or Neil Armstrong walked on the moon, a group of dedicated female mathematicians known as “human computers” used pencils, slide rules and adding machines to calculate the numbers that would launch rockets, and astronauts, into space.

Among these problem-solvers were a group of exceptionally talented African American women, some of the brightest minds of their generation. Originally relegated to teaching math in the South’s segregated public schools, they were called into service during the labor shortages of World War II, when America’s aeronautics industry was in dire need of anyone who had the right stuff. Suddenly, these overlooked math whizzes had a shot at jobs worthy of their skills, and they answered Uncle Sam’s call, moving to Hampton, Virginia and the fascinating, high-energy world of the Langley Memorial Aeronautical Laboratory.

Even as Virginia’s Jim Crow laws required them to be segregated from their white counterparts, the women of Langley’s all-black “West Computing” group helped America achieve one of the things it desired most: a decisive victory over the Soviet Union in the Cold War, and complete domination of the heavens.

Starting in World War II and moving through to the Cold War, the Civil Rights Movement and the Space Race, Hidden Figures follows the interwoven accounts of Dorothy Vaughan, Mary Jackson, Katherine Johnson and Christine Darden, four African American women who participated in some of NASA’s greatest successes. It chronicles their careers over nearly three decades they faced challenges, forged alliances and used their intellect to change their own lives, and their country’s future. –Amazon

I chose this book after seeing the trailer for the movie. I was immediately intrigued about the story because it was 1) untold history, 2) during the Civil Rights Movement, and 3) about women. The book went on sale on Amazon and I immediately grabbed it.

Overall, I give this book four stars. I loved the story, I loved the passion and knowledge of the author, and I loved the history behind it all. My reason for taking off a star is because it was a little hard to follow. I went in to this book knowing it was nonfiction and not a story. However, there were so many characters and so much information that I found myself getting confused. I do believe it was necessary information though. I may have needed to read more constantly instead of taking breaks and reading for short time periods.

One of my favorite quotes was after one of the character’s sons won a derby car race. It definitely stated the theme of the book so well about breaking barriers

I really urge you to read this book. It was worthwhile, even if overwhelming at times. You will learn so much about segregation, the Civil Rights Movement, and the development of NASA and our space race.

Now, it’s time for me to see the movie!

Happy Book Birthday (and a Review)!
For Black Girls Like Me by Mariama J Lockington In…