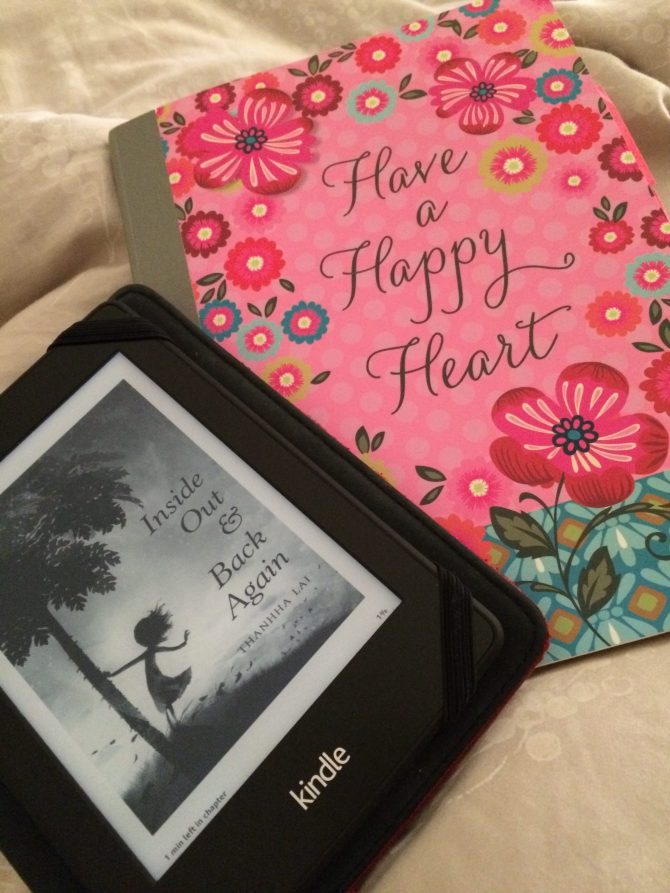 Inside Out and Back Again by Thanhaa Lai 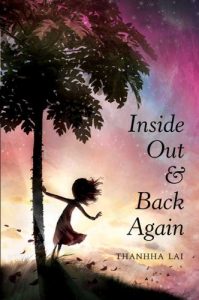 What an amazing cover. It grabbed my attention!

Inside Out and Back Again is a New York Times bestseller, a Newbery Honor Book, and a winner of the National Book Award! Inspired by the author’s childhood experience of fleeing Vietnam after the Fall of Saigon and immigrating to Alabama, this coming-of-age debut novel told in verse has been celebrated for its touching child’s-eye view of family and immigration.

For all the ten years of her life, Hà has only known Saigon: the thrills of its markets, the joy of its traditions, and the warmth of her friends close by. But now the Vietnam War has reached her home. Hà and her family are forced to flee as Saigon falls, and they board a ship headed toward hope. In America, Hà discovers the foreign world of Alabama: the coldness of its strangers, the dullness of its food . . . and the strength of her very own family.

This moving story of one girl’s year of change, dreams, grief, and healing received four starred reviews, including one from Kirkus which proclaimed it “enlightening, poignant, and unexpectedly funny.” An author’s note explains how and why Thanhha Lai translated her personal experiences into Hà’s story.

Why I Chose This Book:

I tried something new for my next read-a Twitter poll. I posted my poll on Facebook and Instagram too, and took those votes into account for those that couldn’t get on Twitter. The four books on the poll included three that I had read previously: Holes by  Louis Sachar, Harry Potter and the Chamber of Secrets by JK Rowling, and Roll of Thunder, Hear My Cry by Mildred D. Taylor. I chose to put Inside Out and Back Again on the poll because I had recently bought it on Amazon as it was a featured “Daily Deal.” I love $1.99 books and couldn’t resist this beautiful cover! I read the description and it sounded good too.

The votes were strongly in favor to my new read and I have to admit, I was excited! I was not disappointed either! I gave this book FIVE STARS! Read on to find out why!

I recommend this book to those who love books with themes of family, war, and rising above. This is a quick read, but it is so powerful. A good book makes you think, makes you change your mind on how you felt before, and makes you see the world a little differently. If you agree, then you would love this book.