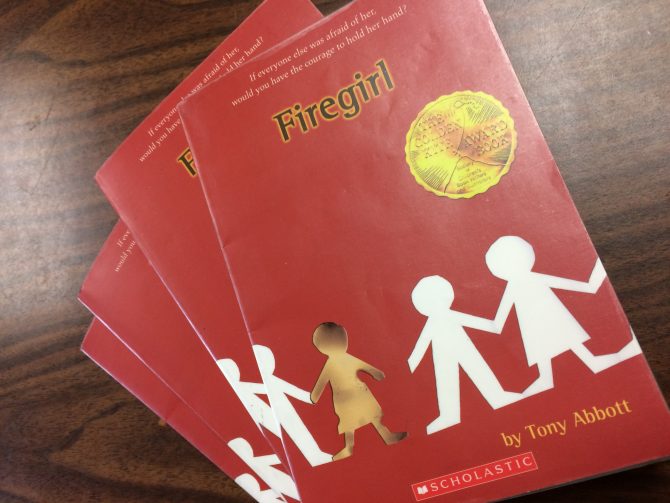 This poignant novel about a boy’s friendship with a burn victim is perfect for fans of R. J. Palacio’s Wonder

From the moment Jessica arrives, life is never quite the same for Tom and his seventh-grade classmates. They learn that Jessica has been in a fire and was badly burned, and will be attending St. Catherine’s will receiving medical treatments. Despite her appearance and the fear she evokes in him and most of the class, Tom slowly develops a tentative friendship with Jessica that changes his life. –Amazon

One of my book club groups finished a book, Firegirl! Here are their thoughts!

Why Did You Choose This Book?

JT: TL said it was a good book.

TD: TL recommended it and said it was a true story and that it was a good book.

JT: 4.5 because it was a good book, but it wasn’t my favorite. Tony was good to Jessica when no one else was.

TD2: 3 because it was boring because at the beginning it said about Tony and his friend, but it didn’t describe Tom at all.

JA: 3.5 because there wasn’t much action and it kind of got boring. There were a few spots in the book that were kind of good. I didn’t like that it was on and off with boring and not boring.

TL: 4 as well. Same with JT. Tony was a really good friend with Jessica even though she didn’t have many friends. He treated her like a normal person.

TD: 4-4.5 because I liked the book, but it could have gave more description or more to the book. What I liked they give you what the title means.

JT: I did an aha moment for the cover. They are praying and they didn’t want to hold her hand.

TD: It was Tony or Jeff.

TD: I found a tough question. It said the kids were scared of something, I forgot, they didn’t want to tell the teacher.

JT: They were scared that Jessica killed her sister. But she didn’t have a sister.

TD: They didn’t know if they should tell the teacher.

JT: Memory moment in the beginning of the book with Courtney.

JT: When Jeff, his uncle, with the car, he was with Jessica so I thought that he would understand and hang out with her and he was really rude.

TD: About the Cobra car-contrast and contradiction-he said he would come by at 12 in the afternoon

JT: and he never came that day

TD: And at a different time. With someone else too.

JT: Be nice to everyone, even if they are different.

TD2: Don’t judge people by the way they look.

TD: Be friends with everyone, even though they don’t fit in.

TL: Treat others the way you want to be treated.

Have you read this book? What did you think?

Book Review Template
What Should Be In A Book Review? Title of Book…

Destruction and Tragedy Project
It’s time for our next research project! This is a…
There are 2 comments for this article