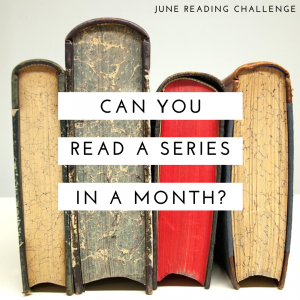 The short answer is no. I cannot read a series in a month. At least, not the series I had chosen.

I had chosen to read all seven books of the Chronicles of Narnia series. First off, let me place the blame outside myself and say that I had trouble obtaining the series from the library.

There. I feel better. Not really.

Let’s be honest though, the real blame falls on me. I had high hopes of reading these stories to my four year old daughter each night. Well, it didn’t go as planned, as she is four and has a mind of her own, and it went a lot slower than I had thought. A lot slower.

I read one book of the series, The Magicians Nephew. Sidenote: did you know that this was not the first book published in the series? There is a great debate on the true order of these books, but what I found was that CS Lewis wished it to be read first. Some argue that it gives too much away, doesn’t let the readers draw connections throughout the series, and spoils the series. I chose to read in the order that my library had them ordered, and this was number one.

Tags: Can You Read a Series in a Month?, chronicles of narnia, goals, reading challenges, series, summer reading