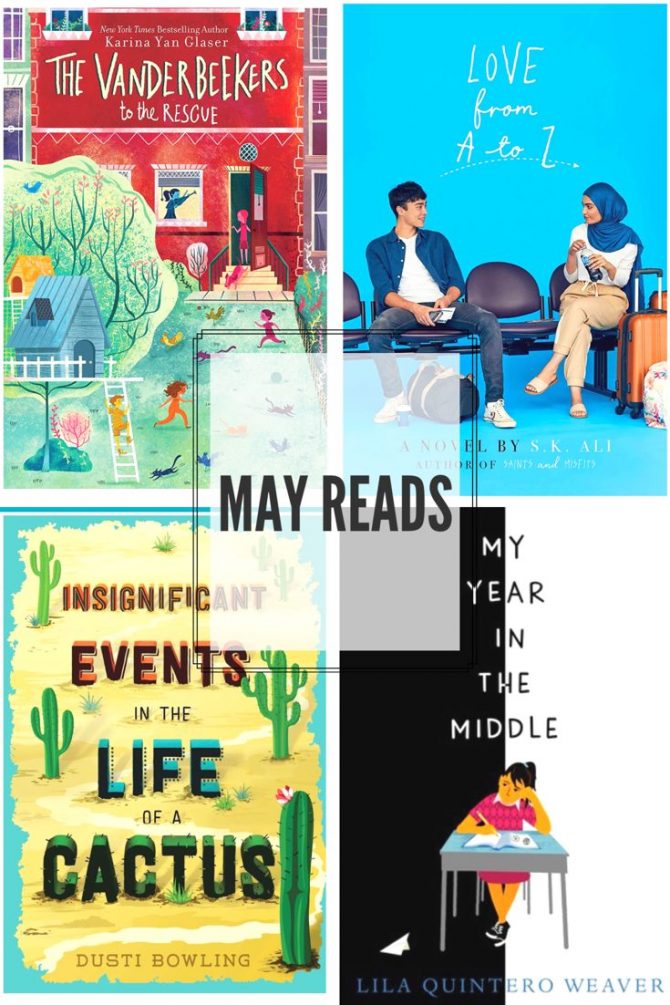 I forgot to post the books I read for the month of May! Here is my collage of all the books, followed by a few of my favorites. In total, I read 23 books!

In a racially polarized classroom in 1970 Alabama, Lu’s talent for running track makes her a new best friend — and tests her mettle as she navigates the school’s social cliques.

Miss Garrett’s classroom is like every other at our school. White kids sit on one side and black kids on the other. I’m one of the few middle-rowers who split the difference.

Sixth-grader Lu Olivera just wants to keep her head down and get along with everyone in her class. Trouble is, Lu’s old friends have been changing lately — acting boy crazy and making snide remarks about Lu’s newfound talent for running track. Lu’s secret hope for a new friend is fellow runner Belinda Gresham, but in 1970 Red Grove, Alabama, blacks and whites don’t mix. As segregationist ex-governor George Wallace ramps up his campaign against the current governor, Albert Brewer, growing tensions in the state — and in the classroom — mean that Lu can’t stay neutral about the racial divide at school. Will she find the gumption to stand up for what’s right and to choose friends who do the same?

From William C. Morris Award Finalist S.K. Ali comes an unforgettable romance that is part The Sun Is Also a Star mixed with Anna and the French Kiss, following two Muslim teens who meet during a spring break trip.

A marvel: something you find amazing. Even ordinary-amazing. Like potatoes—because they make French fries happen. Like the perfect fries Adam and his mom used to make together.

An oddity: whatever gives you pause. Like the fact that there are hateful people in the world. Like Zayneb’s teacher, who won’t stop reminding the class how “bad” Muslims are.

But Zayneb, the only Muslim in class, isn’t bad. She’s angry.

When she gets suspended for confronting her teacher, and he begins investigating her activist friends, Zayneb heads to her aunt’s house in Doha, Qatar, for an early start to spring break.

Fueled by the guilt of getting her friends in trouble, she resolves to try out a newer, “nicer” version of herself in a place where no one knows her.

Then her path crosses with Adam’s.

Since he got diagnosed with multiple sclerosis in November, Adam’s stopped going to classes, intent, instead, on perfecting the making of things. Intent on keeping the memory of his mom alive for his little sister.

Adam’s also intent on keeping his diagnosis a secret from his grieving father.

Alone, Adam and Zayneb are playing roles for others, keeping their real thoughts locked away in their journals.

Until a marvel and an oddity occurs…

“Aven is a perky, hilarious, and inspiring protagonist whose attitude and humor will linger even after the last page has turned.” —School Library Journal (Starred review)

Aven Green loves to tell people that she lost her arms in an alligator wrestling match, or a wildfire in Tanzania, but the truth is she was born without them. And when her parents take a job running Stagecoach Pass, a rundown western theme park in Arizona, Aven moves with them across the country knowing that she’ll have to answer the question over and over again.

Her new life takes an unexpected turn when she bonds with Connor, a classmate who also feels isolated because of his own disability, and they discover a room at Stagecoach Pass that holds bigger secrets than Aven ever could have imagined. It’s hard to solve a mystery, help a friend, and face your worst fears. But Aven’s about to discover she can do it all . . . even without arms.

NYT Bestselling series! Harlem’s favorite family returns in the third installment in the Vanderbeerkers series, wherein the Vanderbeeker kids find themselves racing to save their mother’s baking business from city closure. Illustrated with delightful black and white illustrations.

For the Vanderbeeker kids of Harlem’s 141st Street, spring break couldn’t be off to a better start. Isa’s back from band camp, Oliver’s building his first-ever treehouse in the backyard of the brownstone, and Laney, Jess, and Hyacinth are excited to help their mother when she gets the once-in-a-lifetime chance to star in a cooking magazine.

But the Vanderbeekers’ plans go off the rails when an unexpected visit from city officials puts their mother’s bakery in jeopardy. Now they’ll have to band together to save the day before they’re out of business. Perfect for fans of  The Penderwicks and  Front Desk.

Recent Reads
It’s been a GREAT reading week! I finished some really…