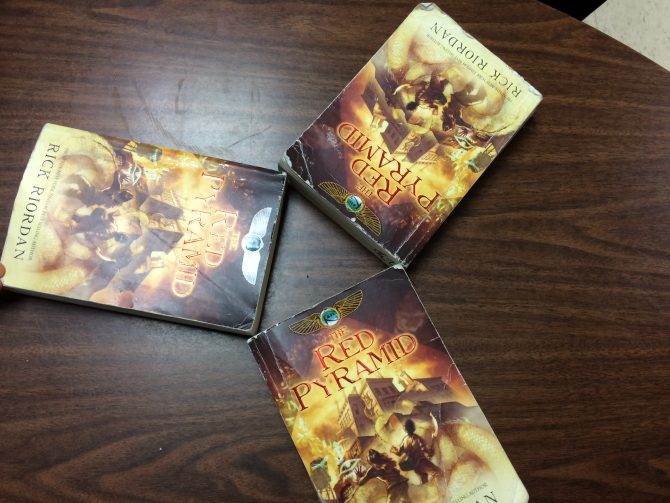 The Red Pyramid by Rick Riordan

Since their mother’s death, Carter and Sadie have become near strangers. While Sadie has lived with her grandparents in London, her brother has traveled the world with their father, the brilliant Egyptologist, Dr. Julius Kane.

One night, Dr. Kane brings the siblings together for a “research experiment” at the British Museum, where he hopes to set things right for his family. Instead, he unleashes the Egyptian god Set, who banishes him to oblivion and forces the children to flee for their lives.

Soon, Sadie and Carter discover that the gods of Egypt are waking, and the worst of them–Set has his sights on the Kanes. To stop him, the siblings embark on a dangerous journey across the globe — a quest that brings them ever closer to the truth about their family, and their links to a secret order that has existed since the time of the pharaohs. – Amazon

My book club group, The Olympian Readers, finished The Red Pyramid. Here is their discussion!

ZP: I read the back of the book and it sounded interesting.

GC: I read other books by the author and they’re good.

GC: 4 because it was good to start out with, but as it got farther into the book, it wasn’t as good because too much was happening at once.

GW: 4 because I liked the beginning and middle, but when it got towards the end it kind of ruined the book. Some of the characters didn’t fit as well and at the end they were adding different characters and a lot of unknown characters.

ZP: 4 because I liked the beginning because it showed them they were learning about their powers and at the end it was a perfect fight and it wasn’t as fun as all the twists and turns and chances for defeat.

ZP: Again and again for the Ba transforming and showing them where to go.

GW: Aha moment when Carter and Zane turned to birds because they didn’t know they could do it.

ZP: Another Aha moment was Zia was right and Amos was the host for Set.

GC: Aha moment when they figured out Zia was not Shabti. The whole book, when they were with her, she wasn’t the real person so it was also a contrast and contradiction.

GW: Carter because I thought it was really cool when he went under the airport station and suddenly he had the strength to dodge them all.

ZP: Bast because she was a cat goddess and another thing is she kept appearing and saving the day.

GC: I liked the Sadie the most because she was raised in England so she said a lot of different phrases and words than we say.

ZP: Not everything is as it seems.

ZP: Keep your friends close and the enemies closer.

GW: I didn’t like how easily the gods got defeated.

Have you read this series by Rick Riordan? What are your thoughts?

Choosing Books
How Do You Choose A Book? My sixth graders responded…