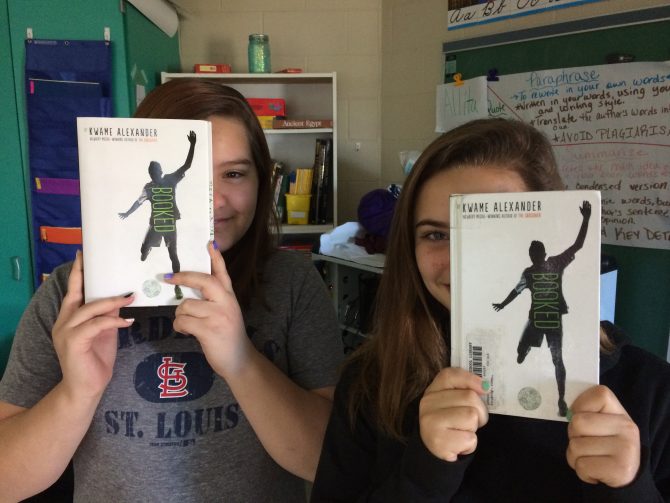 Like lightning/you strike/fast and free/legs zoom/down field/eyes fixed/on the checkered ball/on the goal/ten yards to go/can’t nobody stop you/
can’t nobody cop you…
In this follow-up to the Newbery-winning novel THE CROSSOVER,  soccer, family, love, and friendship, take center stage as twelve-year-old Nick learns the power of words as he wrestles with problems at home, stands up to a bully, and tries to impress the girl of his dreams. Helping him along are his best friend and sometimes teammate Coby, and The Mac, a rapping librarian who gives Nick inspiring books to read.
This electric and heartfelt novel-in-verse by poet Kwame Alexander bends and breaks as it captures all the thrills and setbacks, action and emotion of a World Cup match!-Amazon

Why did you choose the book

SP: I chose the book because I really like sports and soccer was on the cover.

MA: I didn’t think I would like it, but I went along with it because my partners liked it.

MA: I would rate the book a 5 just because it was…

MA: I like how Nick stayed strong through his parent’s divorce.

SP: I gave it a 5 because how hilarious The Mac was and how MA said and how strong Nick was and I really liked how he wouldn’t give up on debating on why he needed to be at the soccer game in Texas.

SP: In the part where his parents were going to get a divorce, it was talking about how he thought they weren’t going to get the divorce because they were acting like a big happy family. HIs mom asked him to move with him.

MA: Nick asked his dad if he loved his mom.

MA: I personally would have fell apart because if my mom left, it would be the end of my world.

SP: A personal problem, if it were your mom, you would be really down. Afterward, if she did it you wouldn’t want anything to do with her.

SP: Don’t give up be strong

JN: Agreed. Have hope in yourself

MA: Standing up to others

SP: Not being cruel back

MA: I liked how Mac, the librarian, did the raps. One thing I didn’t like about it was how Mac gave him the dragonfly box and wouldn’t tell us what was in it.

SP: It was really confusing because before he talked to Colby, he said Mac wouldn’t let him in the box, but then when he did he didn’t tell Colby.

When Mac said he wouldn’t be a librarian-was it shocking?

SP: Mac was a good friend of Nick’s

MA: I would say friends or classmates.

Have you read Booked? What do you think of our discussion. Please comment.

Book Discussion: Stormbreaker
One of my book club groups, Three Meme-ateers, finished the…